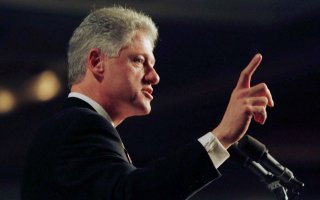 Key Point: Much could have been gained from an earlier opening to North Korea.

North Korea has been busy developing nuclear weapons for a quarter century or more. The Kim dynasty is on its third leader, Kim Jong-un, who recently presided over Pyongyang’s fifth nuclear test. By the end of the year the North could possess as many as twenty nuclear weapons.

Over the same two or so decades, three different U.S. presidents insisted that the Democratic People’s Republic of Korea could not be allowed to deploy nukes. But Washington policy obviously failed: the DPRK long ago crossed what sounded like a “red line.” With the Kim regime also making progress on long-range missiles, the next president may confront a North Korea capable of retaliating against American cities for any U.S. military action.

This result might have been inevitable. Kim Il-sung plunged the peninsula into war and created one of the globe’s truly totalitarian dictatorships. Kim Jong-il formally institutionalized a “military first” policy. Kim Jong-un is emphasizing economic development, but only alongside the nuclear program. Negotiated denuclearization might never have been possible.

Yet it’s worth wondering what would have happened had President Bill Clinton visited the North before leaving office. Secretary of State Madeleine Albright partied in Pyongyang during the brief warming of relations after negotiation of the Agreed Framework. Efforts to arrange a presidential summit foundered as the Clinton presidency ran out of time.

The Kim Jong-il government fulfilled the nuclear pact, but launched a separate uranium-enrichment program which crashed relations with the incoming Bush administration. The latter tried isolation of and later engagement with the DPRK; next the Obama administration largely pushed North Korea into the background while strengthening ties with the South.

What if Clinton had made the trip? And, more importantly, the two governments had moved forward with some agreements to reduce the confrontation level. What if this, in turn, led to a different Bush administration policy—no inclusion of the DPRK in the infamous “Axis of Evil,” for instance?

Given the nature of the North Korean system, it certainly is possible that little might have changed. Even a deal with Washington would not have turned the Kims into Western-style reformers prepared to beat their missiles into ploughshares. Later agreements involving the North came to grief, though the failure was not always solely Pyongyang’s fault.

Nevertheless, a transformation of the U.S.-North Korea relationship a couple decades ago could have dramatically changed the international environment, encouraging the North to take a different path. Imagine President Clinton, who nearly launched military strike on the DPRK’s nuclear facilities, sitting down to have a peaceful conversation with Kim Jong-il, who had succeeded the latter’s father. Then assume a Bush administration which did not target the North alongside Iraq and Iran—the first of which was invaded and the second of which was threatened with military action.

Although North Korean rhetoric should be treated skeptically, the paranoid regime does have enemies. Certainly the United States fits that description. The Bush administration reversed the Clinton approach while making regime change a central foreign policy tenet. President George W. Bush explained that he “loathed” Kim Jong-il. The Obama administration promoted regime change in Libya—after the latter negotiated away its missile and nuclear programs.

So Pyongyang is acting rationally in seeking a capability to deter U.S. military action, whether unilateral or in conjunction with the Republic of Korea. A civil bilateral relationship would have reduced the likelihood of American military action, and thus would have undercut at least this reason for the North’s aggressive military policies.

Rapprochement under the Clinton administration would have had another beneficial impact. Although the People’s Republic of China keeps the DPRK afloat, there is little affection between the two parties. North Korea downplayed the PRC’s role in the Korean War; Kim Il-sung imprisoned and executed Communist Party members allied with Beijing. Pyongyang has ostentatiously ignored Chinese “advice” on nuclear weapons and economic development. In late 2013 Kim Jong-un executed his uncle, once China’s chief interlocutor in the North.

It seems that one reason North Korea has pressed so hard for direct contact with America is to counterbalance Beijing. During the Cold War the DPRK skillfully played the Soviet Union and China against each other. Recently Pyongyang has revived relations with Russia. Had Washington been more open to establishing even limited ties with North Korea, the latter might have been willing to make some concessions to cement the relationship.

Moreover, an opening to the United States and West more broadly would have provided a greater opportunity for the North to draw in economic resources and promote growth. One obvious benefit of possessing a nuclear weapon is the potential for extortion, yet friendlier relations with formerly threatening states would have opened up possibilities for even greater economic gain through less confrontational means. The North might have been willing to adopt at least some limits on arms development in return.

Of course, Pyongyang still would have had reasons to push ahead with its missile and nuclear efforts. Nukes bring prestige and might help tie the military to the Kim dynasty. And even better relations with America would not make the Kim dynasty trust Washington or anyone else.

Nevertheless, over the last two decades U.S. policy toward the North almost looks to have been designed for failure. Successive American administrations targeted Pyongyang while promoting regime change elsewhere in the world. They imposed ever tighter sanctions and emphasized closer military cooperation with South Korea. And they failed to offer China any convincing reason to pressure the DPRK; to the contrary, the so-called pivot to Asia only made it more important for Beijing to back its only military ally.

It’s obviously too late to reverse history. The North Korean nuclear weapon almost certainly is going to exist so long as there is an independent North Korea. However, something still might be gained from a U.S. opening to the North, including gaining diplomatic ground against Beijing. However small the chance might seem, it would be better than doing more of the same, which is likely to yield the same failed result. If Washington keeps its policy toward the North on autopilot, it won’t be long before the latest Kim has added another twenty weapons to his nation’s nuclear arsenal.