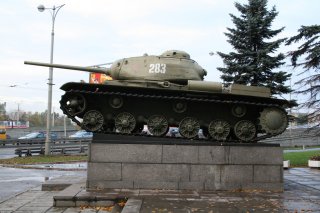 Here's What You Need to Know: For armament, the KV-1 had a single short-barrel seventy-six-millimeter L11 gun in the turret, as well as 7.62-millimeter machine guns in the hull and turret. There was even a third machine gun in the rear of the turret to fend off ambushing infantry.