Hitler Hoped This 'Rocket' Could Stop Allied Bombers. He Was Wrong. 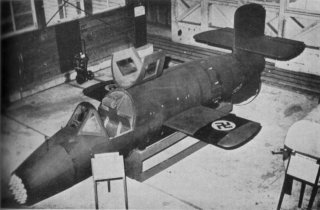 Here's What You Need To Remember: Once the correct altitude was reached, around 20,000 to 30,000 feet, the pilot would take over and bring the Natter as close to enemy bomber formations as possible. The Natter had a rocket pod in the nose that held a number of unguided rockets. These were to be fired simultaneously at Allied bombers and hopefully bring some of them down.

This rocket-powered interceptor would have shot rockets at Allied bomber formations—had it been successful.

By 1943, Germany was steadily being thwarted from the air by the Allies. German cities were being regularly subjected to bombing raids, and as the war went on, experienced German pilots were in short supply.

Today, surface-to-air missiles are the go-to defensive weapon against enemy aerial formations, but at the time, homing technology and terminal guidance systems were immature and unreliable. If a human pilot could guide a missile skywards, however, then perhaps Germany could better defend itself.

Under the Jägernotprogramm, or Emergency Fighter Program, German aircraft manufactures submitted designs for simple interceptors that could be made with a minimum of materials in a minimum amount of time by unskilled laborers and without using many strategic materials such as steel or aluminum. The planes had to be simple enough to be flown by inexperienced pilots who had a minimal amount of training.

The designer Erich Bachem designed the winning proposal. His design, the Bachem Ba 349, also know as Natter after a family of snakes, was essentially a manned rocket that fired a number of smaller rockets from a rocket pod mounted in the nose of the fuselage. It was mostly made of wooden panels that were lacquered and glued into place.

To get airborne, the Natter would be pointed vertically on scaffolding and launched skyward with a rocket engine for propulsion. In addition to the main rocket motor, the Natter used four solid-fuel rocket motors attached near the base of the cockpit. After a ten-second burn that would hopefully get the Natter up to speed, the main rocket engine would fire and bring the rocket plane up to an altitude where it could intercept Allied bombers.

Once the correct altitude was reached, around 20,000 to 30,000 feet, the pilot would take over and bring the Natter as close to enemy bomber formations as possible. The Natter had a rocket pod in the nose that held a number of unguided rockets. These were to be fired simultaneously at Allied bombers and hopefully bring some of them down.

Under ideal circumstances the Natter would fly up and above the enemy after shooting down some Allied bombers, at which point the rocket engine would have burned out, essentially turning the airplane into a glider.

Landing the Natter was most unconventional. The pilot would disconnect the nose of the plane from the fuselage, and just after release, a brake parachute from the rear. The sudden deceleration would free the nose from the glider, and the pilot would also be launched out of the now open cockpit, gliding to safety.

The Natter was never to be used in anger. During its first test flight, a canopy malfunction prevented one of the solid-fuel boosters from separating, which in turn prevented the nose from coming off. The Natter crashed to the ground, killing the pilot and dooming the project.