Hitler's 1944 Ardennes Offensive Had No Chance at Victory 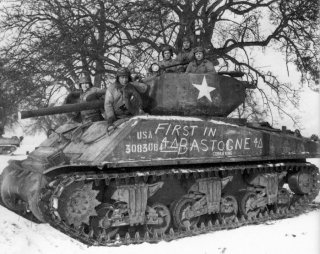 Here's What You Need to Remember: Even with thirty panzer and infantry divisions backed by six hundred tanks, the Germans were not going to disembowel the Allied armies as they had done to the French in 1940, and the Soviets in the summer of 1941.

In September 1944, when Adolf Hitler first told his stunned generals of a plan for a massive counteroffensive in the West; he was thinking big. Like a losing gambler betting the last of his cash on a final throw of the dice, he hoped the Battle of the Bulge might change the fortunes of a dying Third Reich on the brink of defeat.

The plan was to unleash a blitzkrieg by massed panzer divisions through the Ardennes forest, weakly defended by green or exhausted American troops. The Germans would race through the Ardennes, cross the Meuse river, seize the vital port and supply hub of Antwerp, split the British and Canadian armies in the north from the American armies in the south, and then isolate and devour them piecemeal.

But that’s not what happened. Despite inflicting 75,000 American casualties in a month, the Germans failed to capture Antwerp or wipe out the Allied armies. Ultimately the Bulge went down as a German defeat, consuming Nazi Germany’s precious and laboriously hoarded reserves of tanks and supplies needed to keep the Soviets at bay. It delayed the final Western Allied offensive across the Rhine—and facilitated the Red Army’s capture of Berlin six months later.

To do this, we first have to ask, what do we mean by “victory?” Of course, Hitler hoped for a turning point in the war. He had no other choice. Yet by late 1944, with hostile armies entering Germany from east and west, the Third Reich was doomed. It was starved of oil to fuel its tanks and planes, and so short of manpower that it had to draft old men and twelve-year-old children. The German 1944 offensive—code-named “Wacht am Rhein” (Watch on the Rhine)—was a reprise of the 1940 campaign, when the Germans conquered France in six weeks by punching through the Ardennes, splitting the French armies in half, and then isolating and gobbling them up. But in that warm spring of 1940, the German armored columns quickly penetrated through the wooded hills, rivers and narrow roads of the Ardennes forest, and then pounced on the startled French defenders in the open terrain beyond. In 1944, long columns tanks, desperately short of fuel, would have to fight their way through the rough terrain and bad roads, in the midst of an icy winter.

Also in 1940, the Luftwaffe ruled the skies, its Stuka dive bombers pummeling French. Four years later, it was American Thunderbolts and British Typhoons strafing the roads (though bad weather would ground Allied airpower during the first week of the Bulge). French commanders were accustomed to the static combat of World War I: after battling the Nazis for years, Allied commanders like Patton and Montgomery understood mechanized warfare. Even Me-262 jet fighters and V-2 ballistic missiles couldn’t change that balance of forces.

Thus, even with thirty panzer and infantry divisions backed by six hundred tanks, the Germans were not going to disembowel the Allied armies as they had done to the French in 1940, and the Soviets in the summer of 1941. If they couldn’t accomplish that, then it was merely a question of when—not if—the Red Army hoisted the hammer-and-sickle flag over the Reichstag.

But with thirty armored and infantry divisions, and six hundred tanks, couldn’t the Germans accomplish something? Let’s assume that supreme Allied commander Eisenhower failed to dispatch the 101st and 82nd Airborne Divisions to the Ardennes so quickly, or that Patton hadn’t turned his Third Army around and reached the vital crossroads of Bastogne in a week. Or perhaps American combat engineers hadn’t managed to blow so many bridges, or small groups of American soldiers hadn’t fought last-ditch battles to defend a roadblock for a few more hours.

So, the Germans capture Antwerp. And then what? Allied logistics would have been more difficult, but there were other ports, notably Marseille in the south. The Germans end up with a 125-mile corridor to defend from Patton in the south, the British armies to the northeast, and whatever forces would be coming from the west. The skies would clear intermittently in December and January, and when they did, the bombs would fall mercilessly on troops and supply lines, while airdropped supplies would sustain any encircled Allied troops. Despite Hitler’s hopes that Wacht am Rhein would cause the Anglo-American alliance to fall apart, American commander such as Eisenhower and Bradley, and Britain’s Field Marshal Montgomery, put aside their frequent squabbles to smoothly work together to contain and then counterattack against the German thrust.

Hitler could also have chosen to follow the advice of his generals, and opt for encircling and destroying a few American divisions around the city of Aachen. This would have been painful for U.S. morale, but it would have been no more than a tactical victory that perhaps would have kept the Third Reich alive a few more weeks.

Meanwhile, the Soviet steamroller would grind nearer to Berlin. Hitler could send his SS panzer divisions to the east or the west, but not both.

Perhaps Hitler’s biggest mistake in the Battle of the Bulge was wishful thinking. He hoped to emulate his idol Frederick the Great, the eighteenth-century Prussian king who managed to fight off a much stronger coalition until the enemy alliance fell apart. He believed that the alliance between capitalist America and Britain, and communist Russia, would eventually collapse. He was right in his prediction, but wrong in his timing. Capitalist and communist would eventually face off in the Cold War.

But not before the Nazi menace had been defeated. A German victory in the Battle of the Bulge would have changed nothing.