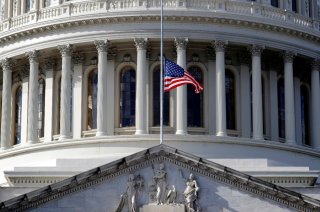 Ten progressive members of the U.S. House of Representatives have declared that national security powers should not be expanded, nor civil liberties curtailed, in response to the attack on the U.S. Capitol. Their letter marks a welcome stand on principle in a debate sure to unfold in coming months.

“While we are all concerned about the security of the Capitol and armed attempts to interrupt our legislative business, we wish to state our strong opposition to the expansion of the domestic national security and surveillance powers of the United States government, as has often been our country’s reaction to horrific acts of violence,” write Reps. Rashida Tlaib (Mich.), Earl Blumenauer (Ore.), Jamaal Bowman, Mondaire Jones, and Alexandria Ocasio‐​Cortez (N.Y.), Pramila Jayapal (Wash.), Ro Khanna and Barbara Lee (Calif.), Ilhan Omar (Minn.), and Ayanna Pressley (Mass.), all Democrats. “We firmly believe that the national security and surveillance powers of the U.S. government are already too broad, undefined, and unaccountable.” And “we pledge to oppose any attempts to expand” these powers “at the expense of the rights of our people.”

The full letter is here and a press summary here.

No one should try to downplay the seriousness of the attack, in which rioters bent on violence managed to get near members of Congress and staffers as well as Vice President Mike Pence. Five persons died at the scene. While most of the rioters behaved in a disorganized manner, recent charge documents portray alleged coordination among a smaller number of participants who dressed in paramilitary gear, moved purposefully as a group, and used two‐​way communications.

But as Conor Friedersdorf recently wrote in The Atlantic, “existing laws appear sufficient to charge, convict, and sentence the men and women who breached the Capitol building. Let’s see how they work before judging them too weak.”

Echoing a point also made by Cato’s Chris Edwards, the 10 progressive members also note that the security failures that day at the Capitol cannot reasonably be blamed on any shortage of funding at the disposal of federal law enforcement.

Putting new powers in the hands of the government is always most popular just after a violent outrage. But “we have been here before and we have seen where that road leads.”

The ten signers include some of the leftmost members of Congress, and not surprisingly when their letter turns to history and analysis it leans that way too. Civil libertarians from other political traditions might select different examples and emphasis.

But those are details, and this makes a fine start. Let’s hope it is followed by similar efforts by other liberty‐​minded lawmakers, including those on the Republican side.