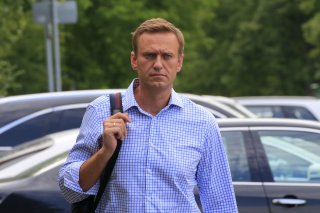 The harrowing videos of Alexei Navalny, a blogger who has captured popular frustration in Russia, screaming in agony on Aug. 20, 2020 before being removed unconscious from a plane to a waiting ambulance, demonstrate the Kremlin’s increasing reliance on coercion to control dissent.

This attack is not the first Navalny has endured. In 2017, he was doused with a green antibiotic that compromised his vision. In 2019, while in jail for organizing protests, he suspected he had been poisoned. Navalny has also been wrongly convicted on charges of financial wrong-doing three times. Although he was released to prevent him from becoming a national martyr, his brother and co-defendant, Oleg, served three-and-a-half years in jail.

Throughout this period, the Kremlin worked to discredit Navalny without making him a martyr.

My book “Elections, Protest, and Authoritarian Regime Stability: Russia 2008-2020,” reveals the nature of Navalny’s threat to the Kremlin – one strong enough to make the claims that he has been poisoned credible.

When he came onto the national stage 2010, Navalny brought a new type of opposition to Russian politics. He is in tune with popular concerns and able to find common ground across nationalist and liberal activists. He calls for removing President Vladimir Putin through elections, while articulating a new vision for Russia.

Navalny’s importance is not about popularity. The Kremlin’s arrests and disinformation campaigns have raised enough suspicions among voters that polling shows he would not win a national election, even in the unlikely event of a fair fight.

Instead, Navalny’s challenge to Putin’s regime rests on his innovative ideas and organizing strategies that have made him a force in Russian politics.

He began as a lawyer, challenging the large Russian energy companies by buying stock and thus gaining the right to attend shareholders’ meetings. He used his access to defy corporate leadership and release documents to demonstrate malfeasance.

He established The Anti-Corruption Foundation – now labeled a “Foreign Agent” by the Kremlin – which collected citizens’ reports of corrupt practices. His RosYama project, literally “Russian Hole,” allows citizens to go online to report potholes – a widespread, chronic problem in Russia – and track the government response.

Navalny amplified his anti-corruption fight in 2011, when he labeled Putin’s political party, United Russia, the “Party of Crooks and Thieves”. When these efforts contributed to mass protest against electoral fraud, Navalny was at the fore. Addressing an unprecedented crowd in 2011, he said, “I see enough people here to take the Kremlin and [Government House] right now but we are peaceful people and won’t do that just yet.”

He joined the movement’s Coordination Council and forged ties across the diverse opposition with the goal of reforming Putinism.

His canny use of social media has given thousands of Russians – both old and, especially, young – new insight and ways to protest against their government.

Navalny drew on the resources of these protests – activists, themes, online fundraising strategies and new coalitions – to build an opposition strategy that links elections and a variety of forms of protest. He brought together an impressive team of young activists who challenge the regime at every step of the election process, from party formation to candidate registration and vote counting.

Volunteers go door-to-door or accompany candidates to meet voters on their daily commutes or in apartment courtyards. They build temporary structures, called “cubes,” on busy streets, where they educate voters about policy. Campaign leaders urge activists to share online messages offline with those who do not use the internet.

When he fell ill, Navalny was campaigning on behalf of a new generation of local candidates.

By demonstrating that Russian elections are little more than performances of the state’s capacity to manufacture votes, the Navalny team reveals the lack of choice and accountability in the system.

In summer 2019, this strategy led to significant protests after the regime barred almost all of the opposition candidates in Moscow’s municipal elections. When the government cracked down on pro-democracy demonstrators, Navalny’s team built a web-based way to identify any candidate who shared its values and urged voters to support that candidate – even if the candidate was in a party that they detested.

Recent work by political scientists Mikhail Turchenko and Grigorii Golosov demonstrate that Navalny’s “Smart Vote” strategy made a real difference in Russias’s 2019 local elections, helping to defeat nearly a third of Putin-aligned candidates in Moscow. Navalny’s team was gearing up to do the same thing in the September 2020 vote.

Navalny’s creative use of new media is not limited to pothole repairs and voting apps. Beginning in 2006, he wrote a popular blog on the Live Journal social networking service. When the Kremlin shut down his blog in 2012, he reinvented his social media presence.

The Anti-Corruption Foundation produced a short film, “Don’t Call Him Dimon,” that lampooned former President and Prime Minister Dmitry Medvedev by showing his vast sneaker collection and flying a drone over his duck pond. Like ducks, sneakers became symbols of the opposition. The expose revealed the myth of Medvedev as an honest leader.

Navalny’s efforts have captured the imagination of young Russians and demonstrated the effects of generational change. Following “Don’t Call Him Dimon,” tens of thousands of young people took to the streets, shocking a country that believed Putin’s opposition was played out. Months later, they flocked to join Navalny’s presidential campaign organization.

Navalny knew the dangers of being the face of opposition to the Putin regime. The day before he fell ill, he joked with young supporters that his death would do more harm to the Kremlin than his activism.

It’s clear that Russians – who have taken to Twitter to urge him to hold on – don’t want to test that hypothesis.