How America Almost Got a Beefed-Up F-22 Bomber 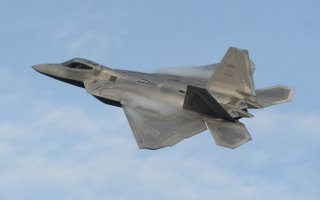 Because stealth fighters have to carry their weapons internally, the FB-22 faced a huge hurdle in finding a way to carry as many bombs as its new wings would allow, without compromising the aircraft’s stealth profile. After all, it was that stealth that made the F-22 special in the first place. Reducing or eliminating that stealth profile in favor of carrying external munitions would have made the whole effort for naught.

Despite the extended fuselage, there was no way to carry that many weapons inside the internal weapons bay, so Lockheed Martin set their sights on a premise that, to this day, has still yet to come to fruition: They would design stealth “pods” that could be mated beneath the wings of the FB-22 to carry the ordnance that, according to their proposal, wouldn’t negatively affect the aircraft’s stealth profile. The primary payload bay was stretched and widened as well, however, to accommodate larger weapons, including bombs the could weigh up to 5,000 pounds.

The F-22’s thrust vectoring capabilities were sacrificed in the FB-22 design, as acrobatic performance wasn’t required of a medium-range bomber, and according to some outlets, there was discussion of replacing the F-22’s twin Pratt Whitney F119-PW-100 engines with a pair of Pratt Whitney F135s. The F-135 would go on to power the F-35 Joint Strike Fighter, and running two of them could have pushed the FB-22 to a rumored top speed of Mach 1.92.

The FB-22 concept had some serious fans at the Pentagon

Air Force Secretary James Roche may have been the highest-profile fan of the FB-22 concept, at one point telling the House Armed Services Committee that he envisioned his branch purchasing 150 FB-22s to fly in concert with 381 F-22s and heavy payload fleets of B-1B Lancers, B-52s, and B-2 Spirits.

It’s important to remember that, at the time the FB-22 was being seriously discussed, the U.S. Air Force had no new bombers in development. The branch was operating the same heavy payload platforms that we are today, in the stealth B-2 Spirit and legendary B-52 Stratofortress for conventional and nuclear strikes, and the supersonic B-1B Lancer resigned strictly to carrying conventional ordnance. The branch didn’t intend to source another bomber until the 2030s, but Lockheed Martin’s FB-22 proposal seemed to offer a cost-effective stop-gap between the dated legacy bombers in service and the advanced bombers of the future that had yet to begin forming.

When Lockheed Martin formally presented the FB-22 to the Air Force, they brought six potential iterations of the fighter/bomber with them. Most were largely the same, with changes made to better prioritize different elements of the Air Force’s requirements. Based on the idea of a 150-aircraft fleet, Lockheed claimed purchasing the FB-22 would offer the Pentagon more than $10 billion in savings over the coming two decades “in logistics costs alone,” and argued that putting the bomber into production would cost about a quarter of developing a new aircraft from scratch.

By early 2006, however, the outlook had shifted from promising to grim for the FB-22. Now fully entrenched in the Global War on Terror, the U.S. military was fighting in an environment that was nothing like the near-peer conflict imagined throughout the Cold War. America was engaging opponents with no airpower, and notably, very little in the way of air defenses. That meant stealth was not as pressing a need as it had seemed just a few years prior, especially with each branch now competing for enough budget for combat operations and new programs in development.

While the FB-22 seemed to offer a great bargain in terms of cost for capability, the need for the capability it offered seemed less pressing as time wore on. By 2006, Lockheed Martin’s latest stealth fighter, the F-35 Joint Strike Fighter, was preparing to begin test flights and would ultimately provide the United States with a second stealth fighter in its arsenal. Importantly, it would be one with a greater emphasis on ground engagements. Meanwhile, the United States found itself embroiled in combat operations in two theaters, neither of which had any real pressing need for a stealth aircraft at all.

With the Soviet Union gone and the threat posed by China still too far off on the horizon to feel urgent, America found itself with a slew of programs aimed at competing with peers… and no peers left to compete with.

With plenty to focus on in the Middle East, the FB-22 program wouldn’t survive 2006’s Quadrennial Defense Review and even its sister jet, the famed F-22 Raptor, would ultimately fall to the budget man’s ax a short five years later. At one point, the Air Force Wanted 750 F-22 Raptors, then it wanted 381 F-22s flying alongside 150 FB-22s. But by 2011, the U.S. decided to settle for just 183 fighters in total.

However, lessons learned from exploring the FB-22 concept may well have played a role in the requirements set forth for the B-21 Raider. Being developed under Northrop Grumman’s banner, the B-21 promises to be the most advanced stealth bomber in history when it enters service later this decade, though it’s important to note, it’s smaller and can carry less than the B-2 and B-1 it’s slated to replace. The B-21 won’t be as fast as the FB-22 would have been, but it will offer greater payload capacity, range, and likely, stealth. Importantly, it’s also slated to arrive in the mid-2020s, a full decade sooner than the Air Force planned while discussing the FB-22. With the F-15EX now also being considered as a viable replacement for the F-15E Strike Eagle, it would seem that, while the FB-22 never made it to fruition, the need for a jet that can do the things the FB-22 could remains present.

Had an FB-22 made it into service, perhaps the Navy could have incorporated it into its own Sea Raptor concept, which hoped to put the king or the dogfight aboard America’s flattops. If that had occurred, its 1,800-mile combat radius would have eliminated the Navy’s current fighter range quagmire, as it would have had the legs needed to engage Chinese targets without sailing carriers into range of China’s hypersonic anti-ship missile systems. Of course, that’s a whole lot of “woulda, coulda, shoulda,” and it’s hard to say if such a thing would even be possible.

You can read more about the Sea Raptor concept, however, in our full feature on it here.