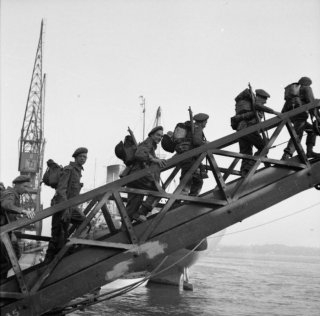 Midway may not have won the war; Japan continued to fight for three more years, and was probably at the limit of its offensive sphere in any case. Still, it represented a key inflection point of the Pacific War, squaring the score and giving the initiative to the United States.

On June 6, 1944, the United States and the United Kingdom led a coalition of Allied countries in the invasion of German-controlled France. The operation, painstakingly planned for months (and prepared for even longer) brought U.S. forces into direct conflict with the Wehrmacht in decisive terms, allowing its defeat in the West and facilitating the collapse of Nazi Germany.

Overlord was not a solely American operation, by any standards. The United Kingdom was an equal partner, and both Canada and Poland made big contributions. Nevertheless, it represented a culmination of the industrial, logistical and intellectual contributions of the United States to the Western alliance, and was made possible by the unique combination of American industrial and military might.

Preparations for Overlord began in mid-1943. Over the next year, the United States and Great Britain would accumulate a massive ground force in southern England, supported by a huge tactical air force and a flotilla of warships and landing craft. When the Allies struck across a broad front in Normandy, German defenders caused significant casualties, but failed to turn back the attack.

Although the Germans managed to keep the Allies hemmed in for about a month, American forces broke out in late July. With forces able to maneuver in France, the Germans had no hope of putting up an effective defense. In December 1944, the Wehrmacht launched a surprise, last-ditch offensive against Allied forces in the Ardennes forest. The offensive was intended to drive to the sea, splitting Allied forces in two and forcing the Western Allies to come to terms with Nazi Germany. Successful American resistance at Bastogne halted the German advance, ending the last opportunity for Germany to affect the course of the war.

America is quintessentially modern, and success in modern warfare depends on much more than deeds of heroic valor. Those deeds are undeniably part of victory, but they require context; the ability to aggregate the tools of national power behind a singular purpose.

Since the Revolutionary War, the greatest American military successes have depended on careful, long-range planning, the organization of assets and the commitment to overwhelming the enemy. The American genius for war, to the extent that it exists, lies in the ability to build advantage so that genius, heroism and chance on the battlefield don’t need to play decisive roles. The tactical battlefield is nothing like a chessboard, but the operational and strategic fields sure are, and American commanders have proven to be exceedingly adept players.

This first appeared in 2014 and is being republished due to reader interest.