How America's Anti-Radiation Missiles Are Game-Changers 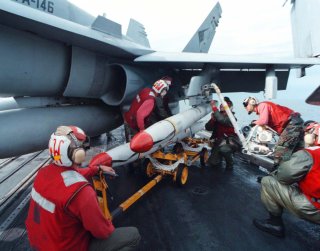 Here’s What You Need to Remember: The most modern anti-radiation missiles can loiter in the air for extended periods of time, moving closer to radio emission sources as they are activated, even intermittently.

No, it’s not some doomsday weapon — but it will give the Navy a potent capability nonetheless.

Northrop Grumman, the AARGM-ER manufacturer, explains that their missile is a “supersonic, air-launched tactical missile system. It has the capability to perform Destruction of Enemy Air Defense missions and is an upgrade to the U.S. Navy AGM-88 HARM system. AARGM is able to rapidly engage traditional and advanced land- and sea-based air-defense threats, as well as non-radar, time-sensitive strike targets.”

Furthermore, the company’s “next-generation AARGM Extended Range (AARGM-ER) program, for the U.S. Navy, is building upon AARGM, currently in production. By leveraging AARGM sensors and electronics, the addition of a new rocket motor and warhead, AARGM-ER will provide advanced capability to detect and engage long-range adversary air defense systems.”

Despite their awe-inspiring name, in actuality, anti-radiation missiles have nothing to do with nuclear power and radiation following nuclear explosions. Instead, they are an anti-air defense weapon, typically fired from the air at targets on the ground, though in some cases, they can also be fired at other aircraft.

The earliest anti-radiation missiles were quite simple. Programmed to follow or ‘ride’ radio waves to their source, they would explode when close to a radio emission source. The best defense against these early missiles was turning off radio comms, denying the missiles a path to follow. Once destroyed or no longer airborne, air defense operators could again turn on their radio equipment.

More advanced anti-radiation missiles countered radio silence by incorporating an inertial guidance system into their flight guidance, allowing the missile to ‘remember’ where the radio source had been. Once turned off, a missile could use the radio signal’s last known location to plot a course to the target.

The most modern anti-radiation missiles can loiter in the air for extended periods of time, moving closer to radio emission sources as they are activated, even intermittently.

Although the AARGM-ER’s range is difficult to determine definitively, it is thought to be around double its predecessor. If true, the AARGM-ER’s range would be greater than 222 kilometers or about 140 miles. Following a recent successful live-fire event, the missile is slated for integration onto the Navy’s F/A-18E/F Super Hornet and EA-18G Growler and the Air Force F-35A, Marine Corps F-35B, and Navy and Marine Corps F-35C.