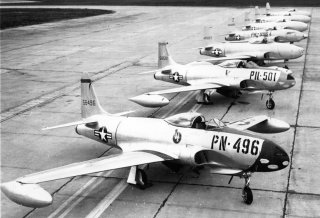 Here's What You Need To Remember: The Shooting Star retained the straight wings and tail of World War II piston-engine fighters—design elements that impaired performance when approaching the speed of sound. Problems with the fuel pump on the XP-80 caused fatal accidents that killed Lockheed’s chief test pilot and later Richard Bong, the top-scoring U.S. ace of World War II.