How Atheists Cope in Times of Crisis 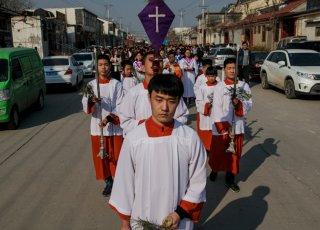 The saying “There are no atheists in foxholes” suggests that in stressful times people inevitably turn to God (or indeed gods). In fact, non-believers have their own set of secular worldviews which can provide them with solace in difficult times, just as religious beliefs do for the spiritually-minded.

The aim of my research for the Understanding Unbelief programme was to investigate the worldviews of non-believers, since little is known about the diversity of these non-religious beliefs, and what psychological functions they serve. I wanted to explore the idea that while non-believers may not hold religious beliefs, they still hold distinct ontological, epistemological and ethical beliefs about reality, and the idea that these secular beliefs and worldviews provide the non-religious with equivalent sources of meaning, or similar coping mechanisms, as the supernatural beliefs of religious individuals.

The number of non-believers is growing, with at least 450-500 million declared atheists worldwide – about 7% of the global adult population. But since non-believers can include not just atheists but also agnostics and so-called “nones” – the religiously unaffiliated, who might tick “no religion” in surveys – this number is likely to be much bigger. Here, we use non-believers to refer to individuals who do not believe in God, and who do not consider themselves religious.

Rationalising the fear of death

The idea that beliefs or worldviews support us in difficult times is the foundation of Terror Management Theory. This holds we fear death because we are consciously aware of the future and therefore our own inevitable demise. This fear can be so great that it can paralyse us when we try to live our everyday lives.

But we can manage this fear – through belief in God and the afterlife, for example, but equally through the knowledge that death is natural. Knowing that one day we will die, worldviews reinforce our beliefs and the identities that we build around them, and can provide comfort – by providing us with so-called symbolic immortality, for example, or feelings of connectedness to something bigger than ourselves. Here, it is the meaningfulness of the belief rather than its (religious) content that is important: among non-believers, increased stress and reminders of one’s mortality are associated with an increased belief in science.

With a team of international collaborators, I designed an online survey to ask non-believers about the worldviews, beliefs or understandings of the world that are particularly meaningful to them. We gathered 1,000 responses from people from the UK, US, Netherlands, Czech Republic, Denmark, Finland, Turkey, Brazil, Canada and Australia.

We found that across these ten countries, the six most common beliefs and worldviews were those based on science, humanism (or belief in humanity and human ability), critical thinking and scepticism (including rationalism), being kind and caring for one another, and beliefs in equality and natural laws (including evolution).

This overlap was striking. Despite huge geographical and cultural differences, we found these categories came up over and over again. Frequently mentioned worldviews included statements like: “I believe in the scientific method and the ethical values of humanism. I reject all beliefs that are not evidence based”, and “We have one life. We have this one opportunity to enjoy our brief moment in the sun, while doing the most good we can to help our fellow creatures and protect the natural environment for future generations.”

Asked to recall whether any of their worldviews were helpful at the time, we found that what helped most often were worldviews based on science, detachment and acceptance. These included beliefs in the naturalness of death, the randomness of life, humanism, free will and taking responsibility. For example, people suggested knowing “that family members live on in their descendants, through personality traits and memories” helps when dealing with a bereavement, while enduring an illness “was just randomness. Stuff like that happens.”

Beliefs about the nature of life and death helped many, including the view that “suffering and isolation are universal experiences”, and that these states will pass: “Things change, and this situation isn’t always going to be like this.” Many indicated that a humanistic worldview was highly important to them, valuing “my relationships with those close to me, and understanding that life can be all too short so we must value the one life that we know we have.”

But how do these worldviews help in times of crisis? Most frequently, the respondents said they helped cope with the situation, reduced anxiety, created an increased feeling of control and sense of order, and explained or gave meaning to the situation.

Many participants indicated that understanding a difficult situation proved paramount to accepting it and coping with it. One said that “understanding the process of loss and moving on via understanding psychology helps”. Others stated that “my belief in science explained what was happening and I also trusted in modern medicine that we could overcome it”, or that it helped to consider that “depression [is] a condition that responds to time and care”.

What this research suggests is that worldviews and beliefs, whether religious or secular, can provide comfort and meaning in even the very toughest situations.