How Attacking Essential American Values is Dangerous to Our Freedom 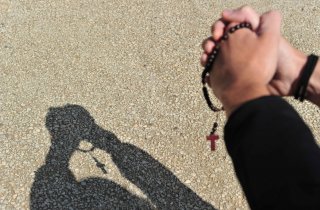 During these tumultuous times, as practically every American institution comes under attack from the far left and its allies, two of our most essential values seem to be especially targeted in an effort to “transform America.”

Those values are faith and family, the two essential pillars that serve as true stabilizing factors in any society.

The attacks on faith and family seem to be relentless.

In Nevada, amid the COVID-19 crisis, casinos are open, but churches are told they must remain closed. In California, Gov. Gavin Newsom told churches that their congregants no longer could sing worship songs, even though they are wearing protective masks while doing so. In Portland, Oregon, radicals not only are burning the flag but Bibles as well. And tragically, in the same vein, vandals are targeting churches.

Two regimes are fighting an ideological war in America today. But what side are you on? And how can you sharpen up on how to defend your position? Learn more now >>

So, how did we get to this point? It didn’t happen overnight.

It is not a coincidence that our current cultural condition, and the turn to hard-left progressivism, began in the late 1950s and into the 1960s, as these values started to erode and lose influence in American society.

Those on the far left actively were launching attacks—sometimes stealthily—through seizing all the major corridors of cultural and political influence.

When these pillars of faith and family—both of which are key components of the Judeo-Christian principles upon which our nation was founded—started to come under attack, all other principles such as fiscal restraint, freedom of conscience, and limited government came under assault as well.

Regarding the family, several factors led our nation down the progressive path and away from conservatism. The social engineering of President Lyndon Johnson’s liberal Great Society of the mid-1960s devastated the family, as fathers no longer had to accept fiscal responsibility for the children they bore.

Legalized abortion greatly devalued human life and further enabled personal irresponsibility and selfish, rather than selfless, behavior. No-fault divorce made it easy for either spouse to walk away from the commitment of “until death do us part,” leaving a trail of broken children behind.

And attacks on the fundamental beliefs of the faithful created a culture where those beliefs not only were mocked but increasingly criminalized. One example: the persecution of those who do not wish to use their skills to participate in facilitating abortions.

On the faith front, many mainline denominations swapped out the Gospel for social justice and the abandonment of absolute truth. This left a spiritual vacuum for progressive thought—which sought governmental, rather than faith-based, solutions—to fill. Lost were the virtues of prudence, justice, fortitude, and temperance—all of which are needed for society to thrive.

Thus, once the pillars of faith and the family were weakened, the rest of the house started to collapse, just as Abraham Lincoln warned the nation in 1858 that “a house divided against itself cannot stand.”

With the gap that was left by the removal of these two pillars of faith and family, progressives were able to introduce policies that destabilized rather than stabilized society. One such policy: encouraging single parenting, which has led to the tragic loss of fathers—an essential individual in every child’s life—in ever-increasing numbers.

Progressives attacked religious freedom and the role churches play in creating a “safety net” that government never could—by feeding both the body and the soul.

Much of the current out-of-control government spending is tied to government takeover and destruction of both these institutions, which taught self-reliance and personal responsibility.

We wrote at length about this in our book “American Restoration: How Faith, Family, and Personal Sacrifice Can Heal Our Nation,” which provides a conservative, faith-based response to our nation’s various ailments.

The breakdown of the family has been a primary factor in the societal chaos we are experiencing. It has led to massive government spending that enables the very behaviors that continue a cycle of despair and destabilization.

The decreased role of faith has led to the breakdown of community, neighbors helping neighbors, and the other societal supports that government cannot recreate but tries to—again through more massive spending, which only perpetuates problems instead of solving them.

The disregard for—and eventual mocking of—religious faith and the values of selflessness and personal responsibility it instills have led to a nation that values its privileges over its principles.

And the result of that, as President Dwight Eisenhower warned us in his 1953 inaugural address, is that a nation “soon loses both.”

Why? Because both family and faith go to the essence of what makes a healthy society. A functional, healthy family provides for and equips the next generation to be self-reliant citizens, not dependent upon government programs for their sustenance. It provides the next generation with the tools and the confidence to succeed in life.

In addition, a young boy who grows up with a strong father as a role model—a father who leads by example of how to love his wife, shepherd his children, and make sacrifices that benefit both—likely will follow in his father’s footsteps. A young boy without that model will try to figure it out on his own—often with disastrous results.

In the same way, a young girl who knows what it is to be valued and loved by a man will make good decisions regarding future relationships. Those good decisions will result in less need for government intrusion and taxpayer support.

In many ways, the church does this as well. It provides a moral framework that teaches that all people are worthy of dignity and respect as they have been created Imago Dei—in the image of God.

For the principles of limited government and a republican government to succeed, morality must be part of the equation. John Adams, signer of the Declaration of Independence and the second president of the United States, recognized this fact when he wrote to the Massachusetts Militia in 1798: “Our Constitution was made only for a moral and religious People. It is wholly inadequate to the government of any other.”

Or as Benjamin Franklin wrote: “Only a virtuous people are capable of freedom. As nations become corrupt and vicious, they have more need of masters.”

Progressivism is a master that restricts freedom; conservatism seeks to expand freedom, which can be expanded only if a society is virtuous.

Thus, with a moral framework in place, people are more self-reliant, more likely to make healthy decisions that benefit society rather than poor ones that result in dependence on government. With healthy families, children will thrive and make positive contributions to society. With a strong faith, and the virtues it instills, society will flourish.

And, sadly, when those values are attacked and weakened, society suffers and descends into personal and corporate chaos. The result is the antithesis of what the left professes it seeks to advance, which is unity (on its terms) and progress. Instead, all we are left with is the bitter fruit of division and descension into cultural darkness.

The battle to overcome this darkness is daunting, but it can be won if we stand up to these attacks on faith, family, and conscience rather than slink away in retreat. As our Founding Fathers wrote, only a moral, righteous, and virtuous people can be free.

If future generations are going to enjoy the freedoms we have cherished, we must return to the moral framework that made these freedoms possible in the first place. Once that moral foundation is rebuilt, America’s house once again can stand strong, united against any storm it may face.

This article by Timothy Goeglein and Craig Osten first appeared in The Daily Signal on August 6, 2020.