How Can America Live With The Rise Of China? 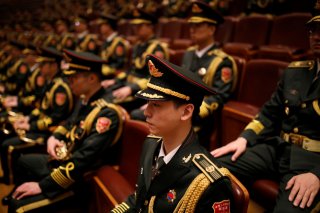 China is building its military, a recent Pentagon report to Congress argued, with the goal of becoming a "world-class" force over the next three decades.

Beijing “has not defined exactly what it means by its ambition to have a world-class military,” said Chad Sbragia, deputy assistant secretary of defense for China, in remarks timed for the report's publication. "Within the context of China's national strategy, however, China will likely aim to develop a military by mid-century that is equal to, and in many cases superior to, the United States' military or that of any other great power that the Chinese view as a threat."

This conclusion can hardly surprise anyone who has tracked China's path over the past few decades. With the population and, increasingly, the wealth of a great power, Beijing wants the military heft of a great power, too. This isn't a good thing, but at this point, it may be inevitable, as may Chinese dominance of its near abroad.

The proper question for U.S. foreign policy, then, is not, “How do we stop the rise of China?” (Answer: We can’t, at least not at anything close to an acceptable risk or cost.) The question is, “How do we live with the rise of China?” Or, more bluntly, “How do we navigate great power rivalry without falling into an avoidable conflict that in the worst-case scenario could end the world as we know it?”

These questions are far too big to fully answer here, but recent headlines offer a useful negative object lesson. Recently, the State Department declassified Reagan-era diplomatic cables concerning U.S. arms sales to Taiwan, which purchases American military equipment as part of its deterrence of mainland Chinese takeover. The publication does not mark a change in U.S. policy per se, but it does formally reveal Washington’s “Six Assurances" to Taiwan before considered a “loosely-kept secret” undoubtedly known to Beijing.

So why release them at all? To make a statement to Beijing? Or, from Beijing's view, particularly when it's become more common to have U.S. Navy warships traveling through the Taiwan Strait, to issue a threat.

And though Taiwan praised the United States’ “strong commitment” to Taiwanese security, Taiwanese President Tsai Ing-wen seems skeptical of the value of such saber-rattling. “The risk of conflict requires careful management by all the parties concerned,” she warned of U.S. and Chinese military activity around Taiwan, which has ramped up in recent months. “There continue to be significant concerns over the potential for accidents, given increased military activity in the region. Therefore, we believe it would be important for all parties to maintain open lines and communication to prevent misinterpretations or miscalculations,” Tsai continued, calling for “restraint,” diplomacy, and a rejection of reckless “military adventurism.”

Tsai’s caution is one Washington would do well to heed. The United States is far more secure against Chinese aggression than Taiwan will ever be. On that note, Taiwan would be better served by “defensive defense,” deterrence-focused arms purchases than those it has recently made. Tanks and F-16s are best characterized as offensive weapons, and Taiwan will never have enough offensive weaponry to defeat the People's Liberation Army militarily. The island's geography does, however, make invasion unappetizing, especially paired with defensive tools like mines and missile defense systems.

But the prudence and commitment to productive negotiation and de-escalation Tsai encouraged would behoove us as well. The Chinese military is not yet a peer competitor, yet it is the second-strongest national force in the world. Needless provocation is more dangerous by the day. We have a big stick—but so does Beijing. We must learn to walk softly.