How Coronavirus Proved the Value of Migrant Workers to Canada 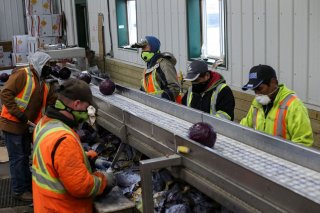 The COVID-19 pandemic has shone a light on a previously hidden population of workers in Canada: temporary migrants.

Temporary migrants come to Canada to work in industries such as agriculture, food services, hospitality and care-giving, in jobs that are often characterized by low wages and difficult working conditions. They are jobs that Canadians are not willing to do.

These workers are often largely invisible to many Canadians, located either in geographically isolated areas, like farms, or indistinguishable at a glance from local working populations.

Before the current wave of news stories about migrant labour during the COVID-19 pandemic, many Canadians may not have known about this workforce at all. The pandemic has not only made them more visible, but has also highlighted the essential nature of the work these migrants do.

Canada has enabled the temporary migration of low-wage workers since the 1960s. The Seasonal Agricultural Workers Program (SAWP), a cyclical temporary migrant labour program operated on the basis of bilateral agreements between Canada and countries like Mexico, has existed for more than 50 years.

The Temporary Foreign Worker Program allows migrants temporary residence in Canada to fill jobs in industries with specific labour shortages — such as food services, hospitality, agriculture and caregiving. It’s been in effect since the 1970s.

These programs bring tens of thousands of migrant workers to Canada each year. They spend months, sometimes years, away from their families and their homes. For most, their time working in Canada cannot be used to apply for permanent immigration.

Some workers have been coming to Canada under the SAWP for decades, for example. Every year, they spend up to eight months in Canada, away from their families, harvesting crops for Canadian dinner tables. Every year, we hear about abuses in this program.

Yes, these workers earn an income and are able to send money home to their families. Yes, their work in Canada is considered by some to be an improvement over available jobs in Mexico. But it remains work that is undervalued by Canadian standards.

In the current pandemic, the essential nature of the work done by temporary migrants has been brought into sharp focus. Concerns about how current border closures and travel restrictions would impact the migrant workforce in the agriculture industry were raised by farmers across the country.

They feared the collapse of their crop, their business and their own livelihood if migrant workers were not permitted to come to Canada this season. Currently, temporary workers are being allowed to continue travelling to Canada but there have been delays.

For some products, such as honey, the specialized skills and knowledge of migrant workers was further highlighted as essential, given the length of time that would be required to train a new workforce in that industry.

Now that migrant workers have been spotlighted, as well as the true value of the work they do in Canada and for Canadians, it’s time Canada dramatically improved their working conditions, their pay, their legal rights and their opportunity to immigrate to Canada.

Although migrant workers are not paid less than Canadian counterparts, one of the hallmarks of the Canadian jobs they fill is low wages. This is especially so in industries that are predominantly made up of migrant workers, like agriculture and in-home caregiving.

The value of these industries and their workers is clear, and their wages should be increased to reflect that.

Employment rights violations, including wage violations, against migrant workers is widespread and well-documented. There is often little proactive enforcement and labour inspections in these workplaces.

Some provinces have adopted legislation requiring employers of migrant workers to register with provincial authorities, including Manitoba, Saskatchewan and British Columbia.

These registries provide provincial authorities with employer information that can and should be used for better and more regular inspections and audits. That helps protect migrant workers and ensure their employment rights are being respected. For provinces without this kind of legislation, tracking down where migrant workers are employed is more challenging, making inspections and audits more difficult to conduct pro-actively.

No path to citizenship

Finally, migrant workers may spend a big portion of their lives in Canada, yet most in low-wage occupations are not eligible to apply for permanent immigration based on that work experience, an immigration option available for migrants in skilled occupations.

As the current pandemic has demonstrated, migrant workers in low-wage occupations are just as vital to the Canadian economy as skilled workers, and should similarly be given the opportunity to permanently immigrate.

A recent federal pilot project for agricultural workers is doing just that, and will hopefully be expanded in the future.