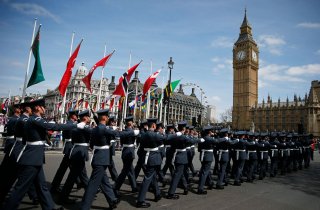 In 1945, Britons were the world’s most enthusiastic newspaper readers. The habit of buying daily national newspapers extended throughout every social class. About 80% of British families read one of the mass circulation London dailies and two-thirds of middle-class families also bought a serious title such as The Times, Manchester Guardian or The Scotsman.

The BBC is rightly given the lion’s share of credit for bolstering the British wartime effort on the Home Front. But newspapers also served massive audiences of engaged readers and, crucially, they could and did perform roles the BBC could not. Newspapers were better able to hold the wartime government to account on issues that mattered to ordinary Britons. Examples of this include coverage of the overseas evacuation of children, air raid shelter policy and food rationing.

Some also brought a sense of irreverent fun to alleviate the hardship of what the Daily Mirror, most successful of the wartime titles, described on VE Day as “five years eight months and four days of the bloodiest war in history”.

But such candour about the endurance that brought victory was not the element in the Mirror’s editorial mix that did most to attract left-leaning servicemen and made it the most popular daily for Britain’s fighting men and their families.

That was sex appeal delivered with a dose of demotic humour in the form of the cartoon beauty Jane. The cartoon strip had been created in 1932 by the cartoonist Norman Pett as “Jane’s Journal, the Diary of a Bright Young Thing”. Pett had originally used his wife Mary as the model for Jane but as the war advanced the role was taken over by former champion swimmer and model Chrystabel Leighton Porter.

She became a potent symbol of British cheerfulness and Winston Churchill described her as the country’s “secret weapon”. Jane was certainly the British serviceman’s favourite and, on VE Day, Pett took the unprecedented step of portraying her entirely naked.

In the cartoon published on page seven, Jane first appears in full army uniform seated on a table in a bar, holding a glass of champagne. She holds a glass of champagne in her left hand. A male soldier friend stands in the doorway carrying a Union Jack. Raising her glass, Jane declares: “Victory at Last, Smiler! I shall soon be out of my uniform now!”. In the next frame Jane is mobbed by a group of British squaddies all demanding “a souvenir” of their favourite pin-up girl. In the final frame, Jane emerges from the crush naked except for a loosely held but strategically draped Union Jack. Smiler jokes: “You’ve said it Jane - You’ve been demobbed already”.

This clearly passed as humour for the audience of the day.

Though far short of the Mirror’s antics with Jane, even at the decorous BBC played with sexual humour in its wartime programming. Mrs Mopp, Cleaning Lady, one of the stars of the popular comedy It’s That Man Again (ITMA), was popularly known for her catchphrase “Can I do you now, sir!”

If cartoon nakedness did not appeal to readers of the popular Conservative Daily Mail, its proprietor, the second Viscount Rothermere and his low-profile editor Bob Prew certainly understood that pictures gave them an advantage with which radio news could not compete. The Mail’s banner headline declared “VE Day - It’s all over. All quiet till 9pm then the London crowds went mad in the West End”. The front page picture depicted huge crowds in Piccadilly Circus. Beneath it appeared the caption: “The face of Victory – Daily Mail pictures give you a vivid impression of the great concourse of joy.”

Throughout their reporting on May 8 1945, newspapers reflected public frustration that the official announcement of the end of hostilities in Europe had been postponed. The surrender of all German forces had been agreed at Reims on May 7. But the chief of the German high command, Field-Marshall Keitel, did not sign the formal instrument of unconditional surrender until shortly before midnight on May 8.

Working throughout the evening of the May 7 among the crowds in central London, Daily Mail reporter Guy Ramsey captured the popular reaction to this delay:

In the VE Day edition of the elite, establishment Times, a parliamentary correspondent diligently recorded why May 8 is recognised to this day as the official end of the war in Europe. Churchill would make “the official announcement” at 3pm. There would be simultaneous announcements in Washington DC and Moscow.

The Times reported the previous evening’s festivities with restrained and decorous pride:

“Although by 9 o'clock last night the expectation of a victory declaration by the Prime Minister had been dispelled by official warnings of its postponement, civilians and service men and women thronged the road and pavements carrying flags and paper hats. Cheering demonstrators climbed the roofs of buses. Cars trying to press through the crowds emerged with dozens of men and women clinging to the bonnets.

After six years of blackouts, the Times was thrilled to note that "Large bonfires ringed London and most public buildings were floodlit”.

On a serious note

At the smaller, more graduate-oriented – though equally liberal – Manchester Guardian, an international flavour was apparent. “Nations Rejoice at Victory” was the headline on one prominent news story. This recorded that King Gustav of Sweden had broadcast “warmest congratulations to Denmark and Norway now that our Nordic neighbours have once again become free and independent nations”.

The Guardian paid particular attention to neutral Ireland, where only days earlier the Taoiseach, Eamon de Valera, had called on Dr Hempel, the German ambassador to express condolences for Hitler who had committed suicide on April 30. The Guardian reflected on the deep divisions apparent in Irish society noting that, on VE Day, people in central Dublin “‘were surprised to see students of Trinity College hoisting the Union Jack and the Red Flag over the main entrance to the University”.

Students assembled at the windows and sang 'God Save the King’ and ‘Rule Britannia’. This provoked an outburst of booing from the crowd. The Guardian noted that ‘police were drafted in and windows were broken’.

The Guardian also recorded a note of caution that was present throughout Britain’s wartime press on VE Day. “We dare not forget” it reminded readers “that war still rages over a quarter of the globe, that British, Americans and Chinese are being wounded or killed every hour of the day and that many of the men who have won this victory in Europe will have again to screw their courage to the sticking point and risk their lives in the Far East”.

Small wonder so many of them were pleased to be temporarily distracted by Jane’s cartoon antics in the Daily Mirror.