How Does the F-16 Falcon Fit the Air Force of the Future? 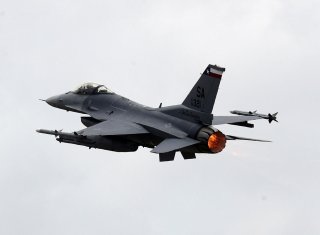 Here's What You Need to Remember: The future fighter force strategy is aimed at pivoting the Air Force away from a largely 1980s-era legacy aircraft to a modern group of fighter jets that can outmatch and destroy enemy fifth-generation aircraft and air defenses operated by major “peer” adversaries such as Russia and China.

These developments comprise the fundamental essence of the Air Force’s plan for its future fighter force structure, a strategy that seeks to adjust the current number of 7 different fighter fleets down to four-plus-one.

“We are sitting on seven fighter fleets and it’s expensive, so we are getting down to four fleets. We’ve brought on more than three hundred F-35s and they are now the second-largest fleet in our fighter fleet,” Lt. Gen. David Nahom, the Air Force’s deputy chief of staff for plans and programs, recently told The Mitchell Institute for Aerospace Studies.

The specifics of the four-plus-one plan include the addition of the sixth-generation aircraft, continued development of the F-35 fighter jet as the cornerstone of the force, adding the F-15EX Eagle II to the mix and upgrading the F-16 Fighting Falcons. That’s four types of aircraft with the “plus one” portion being a reference to the A-10 Warthog. Nahom explained that the F-22 Raptor jets will continue to be upgraded with new software, weapons and sensors so that they can fly for several additional decades—or at least until sufficient numbers of the Next Generation Air Dominance (NGAD) sixth-generation aircraft arrive.

“NGAD will ensure air dominance, yet the F-22 will remain a dominant platform. We will continue to upgrade it, yet there will come a time when we will need a new platform,” Nahom said.

As for the F-16 Fighting Falcons, Nahom explained it will remain crucial for homeland defense and other missions which do not require fifth-generation aircraft. The Fighting Falcons will be getting new active electronically scanned array radars and function as a multirole fighter jet in missions that, as Nahom put it, the Air Force doesn’t “need a high-end platform for.”

Fundamentally, the future fighter force strategy is aimed at pivoting the Air Force away from a largely 1980s-era legacy aircraft to a modern group of fighter jets that can outmatch and destroy enemy fifth-generation aircraft and air defenses operated by major “peer” adversaries such as Russia and China.

The evolving plan seems to signify that the arrival of multirole fighter jets such as the F-35 stealth fighter jet means that fewer aircraft designs will be used to accomplish a wider range of missions. The F-35 jets are arriving in larger numbers. These jets can perform air-to-air attacks, long-range targeting and sensing, air-dropped bomb runs, and close air support missions. The NGAD sixth-generation aircraft, while expected to function as a high-speed, stealthy air-dominance platform to out-perform an F-22 Raptor, may also incorporate certain multirole capabilities. This means that hundreds of older F-15 Eagles and F-16 Raptors are likely on the fast track to the aircraft boneyard.