How Does the Marine Corps’ New Armored Vehicle Stand Up Against Winter? 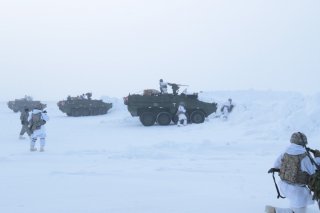 Here's What You Need to Remember: The Marine Corps has had a troubled history with finding a replacement for the lightly armed and armored AAV-P7/A1.

With America in a new Cold War with Russia, the U.S. Marine Corps is placing high hopes on a new amphibious armored vehicle to replace older models.

Yet cold weather is a problem for the Amphibious Armored Vehicle (ACV), currently under development, according to an annual audit by the Pentagon’s Director Operational Test & Evaluation (DOT&E), which evaluates testing on new and improved equipment. The ACV is supposed to replace Marine AAV-P7/A1 Assault Amphibious Vehicles, which date back to the early 1980s.

The audit pointed to issues discovered during cold weather trials at the Cold Regions Test Center at Fort Greeley, Alaska, and Coast Guard Station Cape May, New Jersey. “The ACV crew employed the RWS during developmental testing at CRTC and Cape May. Vision blocks and RWS optics were prone to icing on land and fogging on water, affecting gunner visibility and could lead to performance or reliability problems if water freezes on the RWS sights and cameras.”

In addition, “during amphibious operations, the exposed ammunition in the RWS was also subject to sea spray and potential ice buildup.”

Armored vehicle crews will sometimes poke their heads out of the vehicle for better situational awareness. But in frigid weather, this could be a problem for the ACV’s crews. “During land operations in restricted terrain, ACV crews operated with hatches open making them susceptible to extreme cold,” said DOT&E.

The rifle squad transported by the test ACV was able to complete its missions while wearing bulky cold-weather gear. But cold weather could create resupply problems. “Optimized load planning will be required to ensure equipment does not hinder ingress and egress, and mission essential items will fit inside the vehicle during cold weather ship-to-shore operations,” auditors warned. “For extended cold weather operations, a unit equipped with the ACV may require more frequent sustainment due to limited interior and storage space.”

The Marine Corps has had a troubled history with finding a replacement for the lightly armed and armored AAV-P7/A1. The Expeditionary Fighting Vehicle was supposed to feature better weapons and protection, but after spending $3 billion in development costs, the program was canceled in 2011 due to cost and reliability concerns.

Another suspended program, the Marine Personnel Carrier (MPC), was resurrected as the ACV. In June 2018, the Marine Corps awarded a $198 million contract to BAE Systems to build the ACV, which looks a bit like an U.S. Army Stryker armored vehicle.

However, the ACV has also drawn criticism, in particular because the initial ACV 1.1 version has problems operating in rough waters, and had limited “swim” capability. The ACV only has a sea range of 12 miles, which meant that transport ships had to sail close to shore before launching the vehicles, which means coming within range of enemy anti-ship missiles. While version 1.2 is supposed to have better performance at sea, the Marines are exploring robot “connector” vessels that will ferry the ACV to shore.