How Drones Could Help the Navy Reach its Fleet Size Goals 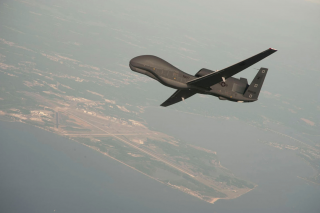 Here's What You Need To Remember: The U.S. Navy has announced plans that call for a significant increase in spending on robotics platforms in the coming years. The service’s future defense programs could include about $12 billion for unmanned aircraft, surface vessels and underwater systems in fiscal years 2021 through 2025.

The U.S. Navy’s Battle Force 2045 plan calls for a 500-ship fleet, and this ambitious expansion is meant to out-match fast-growing rival forces—notably those from China’s People’s Liberation Army Navy, which recently earned the distinction of being the largest naval force in the world.

The U.S. Navy has already begun to ramp up efforts to introduce and deploy large numbers of interwoven, armed surface drones.

This could boost the global maritime unmanned vehicle market.

“The U.S. government is hoping that implementing a modern and distributed force structure to the U.S. Navy will allow it to operate effectively both in open seas and littoral waters,” said Captain Nurettin Sevi, Turkish Navy (Retired), aerospace and defense analyst at analytics firm GlobalData.

“However, the more immediate benefit of the plans to contract 140 unmanned surface and 240 underwater vehicles will be for the defense companies who are already vying for contracts,” added Sevi.

The U.S. Navy has announced plans that call for a significant increase in spending on robotics platforms in the coming years. The service’s future defense programs could include about $12 billion for unmanned aircraft, surface vessels and underwater systems in fiscal years 2021 through 2025.

“The U.S. Navy has been making several investments, including awarding a $35 million contract to L3 Technologies for the development of a prototype medium unmanned surface vehicle (MUSV), which could grow to $281 million if options for eight follow-on craft are exercised; and a $42 million contract awarded to Huntington Ingalls (HII), Lockheed Martin, Bollinger Shipyards, Marinette Marine, Gibbs & Cox and Austal USA for Large Unmanned Surface Vessel (LUSV) studies,” said Sevi.

“Moreover, the Navy aims to procure extra-large unmanned underwater vehicles (XLUUV) at a rate of two per year from FY2023, in addition to the XLUUV being built by Boeing,” he added. “With the implementation of this plan, leading companies are likely to increase their investments and it is expected to enhance cooperation between companies in artificial intelligence (AI) and advanced material technology, which are critical in the construction of unmanned systems.”

Tight Budgets and Other Challenges

While the Navy has set a goal of 2045 to reach the sizable increase in the fleet, it will come at significant costs. It is unclear whether Congress will simply open the coffers to pay for it, and additionally operations, maintenance and personnel costs could squeeze modernization accounts in the coming years.

Yet, in the long term this could be a true investment in the future, as unmanned vessels are expected to be less expensive to procure, operate and maintain than manned platforms. That alone could make them far more attractive as the sea service invests in new capabilities.

“In order to enable unmanned and manned platforms to operate together, significant changes and modifications will need to be made in the existing task organizations, operational doctrines and operator training,” said Sevi. “Unmanned vehicles are being used for intelligence surveillance and reconnaissance (ISR), as well as mine countermeasure operations. Once they have matured and are proven autonomous systems, they will be used along with the manned platform in other operations—primarily underwater threats.”

The Navy may need to make some internal adjustments as it transitions to vessels that operate with fewer or in many cases no sailors on board those warships. And this could truly change the way the U.S. Navy operates.

This article first appeared a few months ago and is being reposted due to reader interest.