How Drones Could Turn the Tables on U.S. Navy Submarines 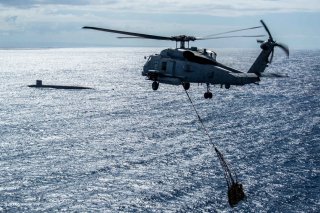 Here's What You Need to Remember: "The oceans are becoming a 'sensor rich' environment full of drones, with eyes and ears everywhere," writes Hambling. "This will leave no hiding place for submarines."

Michael Peck is a contributing writer for the National Interest. He can be found on Twitter and Facebook. This first appeared earlier in 2017.