How Green Berets Fine-Tune Their Rifles for Combat 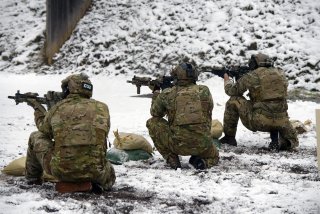 Key Point: The M4A1 eliminates the burst fire function from the old M4 and provides semi-automatic and full-auto firing modes. This allows accessories to be mounted closer to the muzzle, and for lights and laser aiming devices, this can be quite valuable.

The world of service rifles is pretty standard, at least among conventional forces, but once we start looking into more specialized roles, we began to see a bit of variety pop up. And there are few more specialized roles within the military than serving in the one and only U.S. Army Special Forces, also known as Green Berets.

Special Forces operate at the pointy end of America’s foreign policy, often fighting in remote areas and alongside foreign allied or partnered forces. As such, they have specialized tools to accomplish their mission, and that includes their main rifle.

The core Green Beret rifle seems to be the M4A1 Block 2 rifle set. The ‘Block’ rifles refer to a certain setup and accessory package utilized by Special Operations forces. Green Berets have access to any number of rifles, including Sniper rifles, DMRs, Anti-material rifles, submachine guns, and much more, so it’s a solid vote in the platform’s favor that the M4A1 is the main rifle of these Special Operations commandos.

The M4A1 eliminates the burst fire function from the old M4 and provides semi-automatic and full-auto firing modes. Eliminating the burst feature improved the trigger response in the weapon, allowing for greater accuracy. Block 2 rifles typically eliminate the famed A-frame front sight post and extend the rail a fair bit beyond where the FSP would sit.

This allows accessories to be mounted closer to the muzzle, and for lights and laser aiming devices, this can be quite valuable. The closer the light is mounted to the end of the rifle, the less shadow it will create. The laser can be mounted to the top and as far forward as the soldier would like. It also allows the Green beret rifle to be more ergonomic and allow for an aggressive and modern shooting style.

The second most common option you’ll see on the Green beret rifle is a replacement of the standard M4A1 upper receiver with the CQBR upper receiver. CQBR stands for close-quarters battle receiver and mounts to a standard M4A1 lower receiver to produce a shorter and handier rifle for a fight indoors.

CQBR uppers feature 10.3-inch barrels. Shorter barrels are better utilized for clearing rooms, operating in and out of vehicles, and other special mission sets, but the shorter barrel decreases velocity and doesn’t offer the same accuracy over longer ranges as the standard M4A1 upper.

Furniture on a firearm doesn’t refer to a couch and table set. It refers to the stock, handguards, and similar ergonomic accessories that adorn the rifle. The Green Beret rifle tends to be a bit more unique than most, and it seems like the individual soldier is given plenty of leeway on how they equip their rifles.

Handguards – Block 2 M4A1s utilize the Daniel Defense M4A1 RIS II rail system. This quad rail system extends almost to the end of the barrel and allows for plenty of space to mount accessories and do-dads. It’s incredibly rugged and well made.

Forward Grips – Forward grips vary between operators, and it seems like the Magpul Angled Foregrip is quite popular, as is the classic Knights Armament grip and stubby variants of the Tango Down grips. These provide a bit more control to the control and offer an index point that’s always the same. This ensures you can easily grab the rifle the same way every time.

Various seems to be a word that constantly applies to the Green Beret rifle. It speaks to their varied mission set, and the amount of freedom operators have when choosing their rifles and accessories. Here’s a brief rundown on the different types of optics we commonly see adorning the average Green Beret rifle. This is not a complete list, but it covers the most common optics.

The Eotech series are the most common close quarters optic we see in service with the Green Berets. These holographic optics offer a heads-up display type layout that maximizes peripheral vision. The multi-use reticle excels for close-quarters fighting and offers range estimation out to 400 yards. When paired with the Eotech G33 3x magnifier, you have a very capable close to moderate range optic.

The Elcan SpecterDR is an interesting optic that features two modes, a 1X mode for close-quarters combat and a 4x mode for more precise, long-range shots. This gives the Green Beret rifle a very simple but versatile rifle scope.

The T1 and T2 series are mini red dot optics that provide a very lightweight and simple option for close-quarters fighting. Additionally, it’s common for the T1/T2 series to be mounted as offset backup optics to magnified optics.

As low power variable optics become more popular, it’s not a shock to see the average Green beret rifle rocking them. The ATACR is the latest LPVO to be adopted by SOCOM and to be fielded by Special Forces. The very versatile magnification range allows these troops to reach out and touch a target or dial it back for close-range shooting.

The main laser system in use by SOCOM and Green Berets is the classic PEQ 15. This compact device allows operators to use IR and standard lasers for aiming purposes. Green Berets use these mostly with night vision, and they allow you to aim and fire your rifle with NODs in your face.

The Green Beret rifle commonly wears a white for situations where NODs are not viable. The standard SOCOM-approved light is the rugged and reliable Insight WMX200. The WMX200 is very tough and can take a beating but packs an underwhelming 200 lumens of power.

The Surefire Scout models are becoming more popular and pack anywhere from 600 to 1,000 lumens depending on the variant. This offers substantially more light power for longer-range use.

The use of suppressors on service rifles does wonders to improve communication, help preserve situational awareness and even protect a shooter’s ears a bit more than an unsuppressed weapon. The Green Beret rifle will most commonly utilize either the Knights Armament NT4 or the Surefire Socom RC.

Both suppressors proved their reliability during decades of war. They work well to reduce concussion and even reduce muzzle rise and recoil. The Socom RC is almost a half-pound lighter than the NT4 and tends to be the more modern option.

The Green Beret rifle is a perfect representation of both the modularity of the AR platform and the versatility of the Green Berets. Their varied mission set has these Special Forces soldiers fighting in a multitude of different environments and doing a wide variety of tasks. As such, they need a rifle that can keep up. It most certainly seems like the modern M4A1 Block 2 keeps up.

This article originally appeared in Sandboxx News in November 2021 and is being republished due to reader interest.