How Japan Could Build a Monster 6th Generation Stealth Fighter 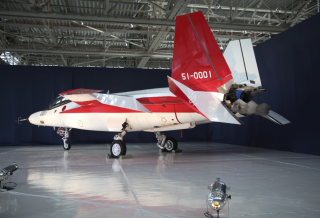 Here's What You Need To Remember: If partnering with Lockheed Martin, Japan may be poised to begin manufacturing one of the world’s most capable stealth fighters, given that company’s prodigious experience with stealth fighters.

In a short statement posted to their website, the Japanese Ministry of Defense announced that the Japanese government had inked a contract with Mitsubishi Heavy Industries to produce Japan’s first domestically-designed stealth fighter, tentatively called the F-X. “We have signed a contract with [Mitsubishi] Heavy Industries Co., Ltd.” the statement read. “In the future, we will steadily proceed with the development of the next fighter (FX) together with the company.”

As previously covered, Japan Self-Defense Forces are looking to have a domestically-designed and manufactured stealth fighter in service by the early- to mid-2030s that would serve alongside Japanese F-35 stealth fighters.

Though still in its infancy, preliminary work has been done on the feasibility of a Japanese-made stealth fighter design. A test platform, called the X-2 Shinshin, first flew in 2016 and was used to glean valuable information on stealth fighter flight characteristics rather than become a dedicated fighter.

Although Mitsubishi Heavy Industries (MHI) will be the prime contractor for the F-2 project, MHI will have to lean on foreign expertise for some of the fighter’s more technologically-challenging manufacturing aspects, namely stealth. Though not yet named, it is possible that Lockheed Martin, the American aerospace heavyweight and F-35 manufacturer, would provide the requisite manufacturing knowledge.

Though the F-X would be the first home-grown stealth fighter for the Japan Self-Defense Forces, though it would not mark the first time that the Forces partnered with an outside partner in aerospace development, nor the first time that Lockheed Martin provided manufacturing know-how to the island nation.

Japan partnered with Lockheed Martin on their Mitsubishi F-2 fighter, an F-16 Fighting Falcon derivative in the mid-1990s that some have called the backbone of Japan Air Self-Defense Forces. Though the two airframes are closely related, the Japanese F-2 is both longer and wider than the F-16. Once in service, the F-X would likely replace Mitsubishi’s F-2.

Interoperability with Lockheed Martin’s F-35 would be an extremely desirable characteristic for the F-X platform. And, as Japan already operates the Lockheed Martin F-35, there is a strong case to be made for help from the American manufacturer.

Regardless of which outside firm Japan decides to partner with, there is now a concrete plan in place for Japan to diversify its stealth capabilities. And, if partnering with Lockheed Martin, Japan may be poised to begin manufacturing one of the world’s most capable stealth fighters, given that company’s prodigious experience with stealth fighters.

Caleb Larson is a defense writer for the National Interest. He holds a Master of Public Policy and covers U.S. and Russian security, European defense issues, and German politics and culture. This article was originally published earlier this month.