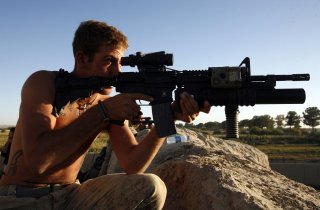 Here’s What You Need to Remember: The M203 is a pump-action weapon that secures itself to a M16A1 rifle by way of a distinctive metal shroud that fit over the existing rifle handgun. The grenade launcher was loaded by pushing the barrel forward and inserting a 40-millimeter grenade into the breech.

The M203 passed trials and was accepted by the Armed Services in 1969. The M203 had the same range as the M79 and grenades had the same burst radius of approximately five yards. It weighed half as much as the M79 while still allowing a grenadier the use of a M16A1 rifle. An M203 grenadier could fire off his entire basic load of thirty-six rounds in less than three minutes, a devastating amount of explosive firepower for small infantry units.