How Much of a Gamechanger Is Anti-Access/Aerial Denial Technology? 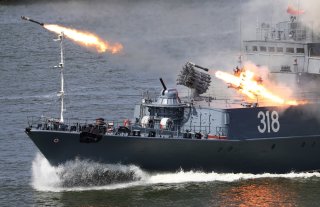 Here's What You Need To Remember: Taking the analysts’ conclusions together, one can arrive at a more nuanced understanding of the challenges posed by anti-access weapons. Undeniably, A2/AD weapons can threaten large areas and will likely shape operations in the regions where they are present. However, they cannot “shut down” access to a region by themselves, and their threat can be mitigated through appropriate planning using existing technologies and tactics.

Taking the analysts’ conclusions together, one can arrive at a more nuanced understanding of the challenges posed by anti-access weapons. Undeniably, A2/AD weapons can threaten large areas and will likely shape operations in the regions where they are present. However, they cannot “shut down” access to a region by themselves, and their threat can be mitigated through appropriate planning using existing technologies and tactics.

Sébastien Roblin holds a master’s degree in conflict resolution from Georgetown University and served as a university instructor for the Peace Corps in China. He has also worked in education, editing, and refugee resettlement in France and the United States. He currently writes on security and military history for War Is Boring. This article first appeared two years ago.