How a New Middle Eastern Alliance Is Combating Iran 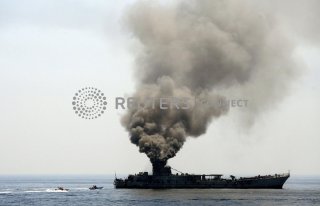 Here’s What You Need to Remember: The joint naval exercises give further attention to a remarkable shift in the Middle Eastern balance of power

The U.S. Navy announced that it had initiated a joint naval training session with Israel, Bahrain, and the United Arab Emirates on Thursday—the first time that the three Middle Eastern nations engaged in overt military cooperation following the 2020 “Abraham Accords” that normalized relations with Jerusalem.

According to the statement released by the U.S. Navy’s Fifth Fleet, the training is primarily concerned with “visit, board, search and seizure tactics.” Its intent is to “enhance interoperability” between the navies involved.

The choice of venue—the Red Sea—is significant. That body of water, capped at one end by the Suez Canal and by the “Bab el-Mandeb” Strait at the other, is a conduit for much of the world’s oil trade—and has come under greater attention worldwide since the onset of the Yemeni Civil War, which has endangered trade near its southern terminus as Houthi rebels have attempted sea attacks against passing vessels.

Both the United Arab Emirates (UAE) and Bahrain are participants in the conflict in Yemen, although Bahrain’s role is relatively minor. The two Gulf Cooperation Council (GCC) nations took part in the Saudi Arabia-led intervention in 2015, although Abu Dhabi’s objectives in the conflict have not always matched Riyadh’s.

The joint naval exercises give further attention to a remarkable shift in the Middle Eastern balance of power, with Israel and the two small Persian Gulf states pursuing friendly political, economic, and military relations. Although Abu Dhabi and Jerusalem have coordinated for decades prior to the Abraham Accords, sharing a covert military alliance against the mutual threat represented by Iran, open cooperation between the two sides did not begin until the unorthodox foreign policy of President Donald Trump. Trump played a key role in the Abraham Accords agreement, hosting the three nations in a joint signing ceremony at the White House. Sudan and Morocco recognized Israel the same year, largely in exchange for political gains; at Trump’s request, the United States removed Sudan from the State Sponsors of Terror list and indicated it supported Morocco’s claim to the disputed Western Sahara region.

Earlier in October, a delegation of Emirati officials attended air force exercises within Israel, in which the United States, France, and Germany also took part.