How One Battle Solidified Ottoman Control Of The Middle East 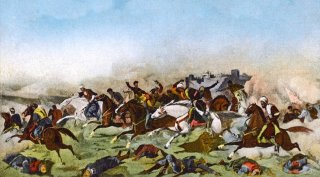 Here's What You Need To Remember: As a result of Ottoman control, much of the trade between Europe and the Middle East passed through Istanbul or Aleppo, decreasing the importance of Egypt, Iraq and the Arabian Peninsula. Formerly important cities such as Baghdad and Alexandria became dusty provincial towns. Arab culture also stagnated under Turkish rule.

Five centuries ago, the contours of the modern Middle East were shaped through a series of Ottoman battles. The outcomes of these battles—which shaped the region’s politics, demographics and religious movements—were much more important in the long run than modern phenomena such as the Sykes-Picot Pact. This month marks the five hundredth anniversary of one of the most important of these battles, the Battle of Marj Dabiq, between the Ottoman Empire and the Mamluk Sultanate of Egypt, the Levant and the Hejaz.

Marj Dabiq means the “meadow of Dabiq,” and was fought next to the town in modern Syria where Islamic State believes Armageddon will occur, on the basis of a hadith (a saying attributed to Muhammad). Northwestern Syria is littered with countless battle sites, ancient and modern, as it is situated on the most traversable land route between Turkey and Europe, on the one hand, and the Levant, Egypt and Mesopotamia, on the other hand.

In the early sixteenth century the Ottoman Empire, having already conquered most of the Balkans, shifted its attention to the Middle East. The initial impetus for this was the influence of the rapidly expanding Safavid Persian Empire. The Safavid Empire originated in 1501 in what is today East Azerbaijan Province in northern Iran, and soon expanded to include much of Persia, Afghanistan and Iraq. It wielded enormous influence over many of the Turkish and Kurdish tribes of eastern Turkey, many of which were influenced by the Shia propaganda of the Safavids. In order to counter this enormously destabilizing influence on their eastern flank, the Ottomans moved to confront the Safavids directly. This led to the pivotal Battle of Chaldiran on August 23, 1514, which resulted in an Ottoman victory, aided by its superior artillery. Chaldiran cemented Ottoman rule over eastern Turkey and Mesopotamia and limited Safavid expansion mostly to Persia. This ultimately checked the expansion of Shia Islam and strengthened the association between Iranian national identity and Shia Islam. Sunni Islam, championed by the Ottomans, became permanently dominant throughout most of the rest of the region.

The Battle of Chaldiran soon led to the region’s other pivotal battle of the era. Having secured his empire’s eastern flank, the Ottoman Sultan Selim I could turn his attention to the southwest, where the Mamluk Sultanate was dominant. The Mamluk Sultanate had been the dominant power of the Islamic world for three centuries, ruling over a stable heartland in Egypt as well as over the holy cities of Mecca, Medina and Jerusalem, while much of the rest of the Islamic world was fractured and in a chaotic state of warfare in the aftermath of the Mongol invasions. The Mamluk Sultanate was founded in Egypt in 1250 by an oligarchical caste of Turkic and Circassian slave-soldiers, Mamluks, who seized power from the Ayyubid Dynasty of Saladin. Their claim to fame was stopping the Mongol advance at Ain Jalut in 1260. Furthermore, after the Mongol destruction of the Abbasid Caliphate in Baghdad in 1258, a surviving member of the family escaped to Cairo, where he and his descendents set up a “shadow caliphate” under Mamluk control. However, by the early 1500s, the Mamluks had begun to slowly decline.

The Ottomans greatly feared the possibility of an alliance between the Mamluks and Safavids. After the Battle of Chaldiran, the Safavids and Mamluks concluded what seemed to amount to a defensive pact, wherein if the Ottomans invaded Persia again, the Mamluks would move north into Turkey from Syria. This led to the Ottoman-initiated invasion of the Mamluk Sultanate in 1516.

As the Ottoman invasion of Syria under Selim I commenced, the Mamluk Sultanate found itself ill prepared for the war. The Mamluk sultan, Qansuh al-Ghawri, had previously engaged in incompetent and confusing diplomacy, trying to support both the Ottomans and Safavids, and the army he sent north to Syria ravaged the city of Aleppo instead of protecting it, losing the support of the local population, though this had occurred before the sultan himself arrived. During the course of the subsequent battle at Marj Dabiq, the governor of Aleppo, Kha’ir Bey, betrayed his master by calling for a retreat from the left flank and by spreading rumors that Qansuh had been slain (he was rewarded with the governorship of Ottoman Egypt from 1517 to 1522).

However, the key factor in the Ottoman victory was its mastery of new military technology and tactics. Both the Mamluks and Ottomans fielded about sixty-five thousand troops, but the Mamluk forces were overly dependent on cavalry and tried to win the battle through cavalry charges. On the other hand, the Ottoman forces skillfully deployed artillery on the flanks and musketeers in the center. This overwhelmingly superior firepower crushed the Mamluks, who fled after seven thousand were killed, including Sultan al-Ghawri.

The Mamluk Sultanate collapsed soon afterward. With the follow-up Ottoman victory near Cairo at the Battle of Ridaniya on January 22, 1517, Egypt became an Ottoman province. Additionally, control over the Hejaz passed to the Ottomans, with the Sharif of Mecca transferring his allegiance from the Mamluk to the Ottoman sultans. Most importantly, Ottomans gained control over the “shadow caliph,” who was taken to Istanbul and transfered the caliphate to the Ottoman sultan (though this claim was not uncontested; many Mughal rulers, as well as the Sokoto Caliphate in West Africa, claimed this title). However, most of the Sunni world came to accept the Ottoman claim to the caliphate. Thus, the Battle of Marj Dabiq set in motion four centuries of Ottoman religious dominance over the Muslim world and political dominance over much of the Arab world.

Other than its immediate political and military results, the Battle of Marj Dabiq had long-term religious and political implications for the Middle East. The Ottoman Empire became much more resolutely Sunni as a result of gaining control over the caliphate and millions of new Sunni Arab subjects. While the Ottoman Empire had always been loosely Sunni, its was a kind of folk Sunni Islam with strong Sufi elements. As the empire grew, the need for trained orthodox jurists who could interpret Sharia grew. In religious matters, the empire innovated little and was generally ill disposed toward Shia. The caliphate, in fact, became an ever more important institution, as a rallying point for Muslims during the spread of European colonialism. Thus the conservatism of much of the region and the use of Islam as an anti-imperialist standard date from Ottoman times. On the other hand, the union of imperial Ottoman power and wealth with religious functions also alienated many Arabs from the caliphate. Puritanical reactions culminated in the rise of the Wahhabi movement in central Arabia in the eighteenth century.

While Ottoman rule was beneficial for Turkey and parts of the Levant, strong institutions failed to put down roots in much of the Arab world, which the Ottomans ruled through governors, intermediaries, tribes or, often, Mamluks. Political independence survived only on the very fringes of the Arab world—in Morocco, in Sudan, and in parts of central and southern Arabia. As a result, sophisticated political cultures did not develop throughout much of the region until the nineteenth century. Ultimately, cultured Egypt, which was prominent in the region, only partially regained its former position as the main player in the Middle East in modern times; it must share cultural and political influence with Turkey, Saudi Arabia and Iran.

As a result of Ottoman control, much of the trade between Europe and the Middle East passed through Istanbul or Aleppo, decreasing the importance of Egypt, Iraq and the Arabian Peninsula. Formerly important cities such as Baghdad and Alexandria became dusty provincial towns. Arab culture also stagnated under Turkish rule. Other than religious work, very little literary and scholarly work was done in the Arabic language, and throughout much of the Islamic world, poetry and belles lettres were produced mostly in Turkish and Persian, as well as in Chagatai and Urdu.

Thus, the Battle of Marj Dabiq had enormous consequences for the present day. It contributed to the modern political and religious culture of the Middle East and led to an eclipse of Arab power and institutions. Even after the collapse of the Ottoman Empire, much of its legacy continues to shape the Arab world, which would not have fallen under its control had the Ottomans not defeated the Mamluks.