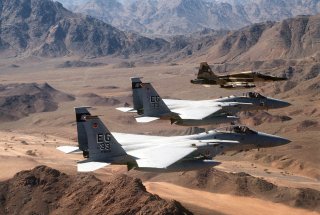 When GPS-enabled sensors pinpointed enemy targets, surveillance aircraft monitored enemy troop movements and stealth bombers eluded radar tracking from air defenses in the opening days of Operation Desert Storm decades ago -- in January of 1991 – very few of those involved were likely considering how these attacks signified a new era in modern warfare.

When veterans, historians and analysts commemorated the 28th anniversary of the first Gulf War in February of this year, many of them likely now regard the military effort as a substantial turning point in the trajectory or evolution of modern warfare.

Many analysts and Pentagon strategists are quick to point out that the US margin of military technological military superiority is much less than it was at the time of the Gulf War; potential adversaries have since gone to school on US weapons and have succeeded in narrowing the gap.

What the World Learned

Johnson retired from the Air Force in 2016, upon finishing a lengthy and distinguished Air Force career - which included flying high-risk A-10 combat missions during the Gulf War. Johnson spoke with Warrior prior to his retirement to offer a rare, experienced perspective on the emergence of new technologies during the Gulf War.

“We saw the first glimpses in Desert Storm of what would become the transformation of air power,” he said, speaking to Warrior in the Pentagon several years ago.

The advent of much great air-fired precision weaponry, aided by overhead surveillance and GPS for navigation is largely referred to as the 2nd Offset – a moment in the evolution of warfare marked by significant technological leaps forward. Johnson explained that the 2nd Offset fully came to fruition in the late 90s during Operation Allied Force in Kosovo.

Also, airborne surveillance, in the form of the Joint Surveillance Target Attack Radar System, or JSTARS, provided attacking forces with an unprecedented view from the sky, Johnson said. The aircraft used Ground Moving Target Indicator and Synthetic Aperture Radar, or SAR, to deliver a “rendering” or painted picture of ground activity below.