How the Precision Strike Missile is Key to America's Deterrence 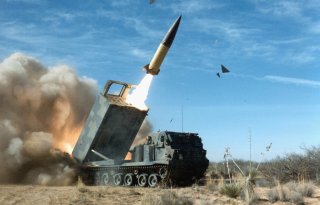 Here's What You Need To Remember: If the U.S. is to deter conflict with both of these great power competitors and defeat any attempted aggression by either, it absolutely must modernize its long-range fires capabilities so as to achieve not merely parity, but what military planners call overmatch, which is another word for superiority.

A little over two years ago, then Chief of Staff of the Army General Mark Milley surprised most of the defense community by announcing a new modernization strategy focused on six priority areas: Long-Range Precision Fires (LRPF); the Next Generation Combat Vehicle; Future Vertical Lift; Networks, Air and Missile Defense; and soldier lethality. To ensure these priorities would receive adequate attention and support, the Army leadership decided to radically restructure its acquisition organization, creating a series of Cross-Functional Teams (CFTs) to support these priorities and standing up a new four-star command, Army Futures.

According to multiple sources, LRPF is the Army’s number one modernization priority. The reasons for this are simple: today, the U.S. and its closest allies are outnumbered and out-ranged by Russian and Chinese long-range surface-to-surface strike capabilities. A recent RAND Corporation study warned that the U.S. and NATO are seriously outmatched by the Russian Army's artillery, rockets, and missile systems in terms of both range and the total volume of fires that can be generated. China, too, has a large and growing arsenal of air, land, and sea-based missiles of increasing range and lethality. This massive investment in long-range precision fires, when coupled with their extensive air and missile defenses, provides both countries with a potent Anti-Access/Area Denial (A2/AD) capability.

If the U.S. is to deter conflict with both of these great power competitors and defeat any attempted aggression by either, it absolutely must modernize its long-range fires capabilities so as to achieve not merely parity, but what military planners call overmatch, which is another word for superiority. According to General Robert Brown, U.S. Army commander Pacific and the senior mentor to the LRPF CFT, the primary objective of the LRPF Cross-Functional Team is to develop “cannons that can go as far as rockets today and rockets that can go as far as today’s missiles and missiles that can go out to at least 499 kilometers and maybe beyond, depending on the [Intermediate Range Nuclear Forces] Treaty.”

The Navy and Air Force are moving aggressively to expand the overall lethality of their platforms and to increase both the range and precision targeting of their missiles. The Army and Marine Corps have recognized the need to get into the long-range precision strike business both to support ground forces but, perhaps even more importantly, to support the Joint Force by targeting enemy ships, infrastructure, air and missile defenses, and long-range weapons.

The LRPF CFT has conceptually broken its various programs into three groups reflecting the ranges at which engagements would take place. In terms of the so-called close battle, involving ranges up to 100 kilometers, the goal is to increase the range, lethality, and maneuverability of existing towed and self-propelled artillery. Industry has already demonstrated the ability to double the range of the M109A7 Paladin self-propelled artillery out to 60 kilometers. The ultimate goal is to deliver high-volume cannon fires out to at least 100 kilometers.

At the other end of the spectrum, involving long-range fires to engage strategic targets, the Army is working on futuristic concepts such as the Strategic Fires Missile (SFM), with a potential range of up to 2250 kilometers, and the Strategic Long Range Cannon, which could fire a shell out to 1,000 kilometers.

The sweet spot, so to speak, in the modernization of Army long-range fires lies in the area between the close battle and strategic targeting. This is the so-called deep battle that will occur at ranges of between approximately 100 and 700 km. This happens to be the range band where U.S. competitors, particularly Russia, have had the greatest advantage. U.S. weapons capable of reaching these ranges will find a wealth of targets critical to an adversary’s A2/AD capabilities and to their ability to command forces, provide logistics support, conduct offensive air operations, concentrate ground formations and conduct naval operations. In addition to providing greater lethality, systems capable of operating to the farther reaches of the deep battle can conduct strikes from outside the range of many enemy weapons.

The key to success in modernizing Army long-range fires for the deep battle is the Precision Strike Missile (PrSM). This missile will replace the current system, the Army Tactical Missile System (ATACMS), which has a maximum range of 300 kilometers. The new missile will be longer-range, at least 499 kilometers. The Army wants to be able to fit two PrSMs into the same launch canister that currently holds a single ATACMS. PrSM must be able to find its targets in the face of electronic countermeasures, as well as have an improved motor and easier maintenance than ATACMS. A key requirement is that the new missile has an open architecture to support future planned improvements, called spirals. One of the most important of these will give PrSM the ability to attack naval targets. With the U.S. withdrawal from the Intermediate Range Nuclear Forces Treaty, a future spiral could increase PrSM’s range up to 700 kilometers.

Competing to build the PrSM are two of this country’s premier defense companies, Lockheed Martin and Raytheon. Both have extensive experience designing missile systems. Lockheed Martin currently produces and upgrades the ATACMS. It also builds the Long-Range Anti-Ship Missile. Raytheon has decades of experience developing and producing the Standard Missile in a number of variants.

The importance of PrSM to Army modernization is underscored by the decision to advance the date at which it wants to deploy the new missile from 2027 to 2023. Fortunately, the Army can have confidence in this decision because both companies are making good progress. Prototypes have been developed. First flight tests are reported to be planned for the end of this year. That will lead to the awarding of a four-year contract to one of the two competitors for Engineering and Manufacturing Development, followed by a production decision. In comparison to the old Army acquisition system, this is lightning fast.

Even if the PrSM can be developed on time, there are other challenges that the LRPF CFT must address. The most important of these is acquiring the necessary targeting information to support new longer-range fires systems. Any solution will have to be both joint and multi-domain, collecting information from a range of assets such as space-based sensors, the F-35, the much-anticipated Future Attack Reconnaissance Aircraft, drones and even Special Forces teams, fusing the data, and getting it disseminated as actionable intelligence to an appropriate shooter.

This article first appeared at Real Clear Defense in 2019. It is being republished due to reader interest.