How to Re-Energize U.S. Strategy in the Pacific 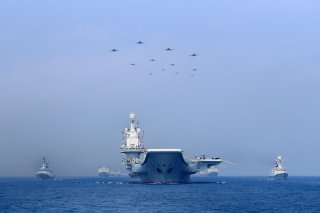 Here's What You Need To Remember: To be sure, the U.S. leadership knows what it wants, namely to preserve a status quo that has served the region well for seventy years. Yet conserving a status quo betokens a static, reactive strategic vision. Washington is stuck trying to adapt to a strategic setting China has repeatedly altered through bewildering actions.

What to do in the South China Sea? Ask a fighter pilot. One in particular: the late U.S. Air Force colonel John Boyd. Colonel Boyd would exhort U.S. officialdom to grasp the strategy China is pursuing in Southeast Asia, and to acknowledge—indeed, grok—that Beijing wants to transform the regional maritime order in ways inimical to America, its allies, and all seafaring nations. That’s a challenge worth taking seriously.

The precepts underlying the liberal order—in particular, that no coastal state makes the rules governing use of the global commons—should be nonnegotiable for the United States. Accordingly, Washington must summon up resolve, resources, and allies to defend the commons rather than talk itself into believing Beijing will compromise away things it deems of crucial importance—things such as sovereignty over regional waters, skies, and land features. If U.S. leaders gird themselves to do the former, they might stand some chance of achieving the latter.

In short, administration chieftains must orient themselves to Beijing’s strategy while clarifying their own purposes and deciding how much they treasure those purposes. Only after completing the intellectual work and a gut-check can the administration design a strategy that deploys power to fulfill its goals. Executing the strategy will prove simple by contrast with devising it—although as military philosophers warn, accomplishing the simplest thing is difficult amid the hurly-burly of strategic competition and conflict.

Acting as custodian of nautical freedom in Southeast Asia is an open-ended mission. It will prove neither quick, nor cheap, nor risk-free. “Genghis John”—such was his ornery repute—would grin knowingly at the administration’s plight. A self-made military strategist of Cold War vintage, Boyd devised his “OODA” decision cycle—observe, orient, decide, act; lather, rinse, repeat—to explain how combatants adapt to ever-changing surroundings. (Or not, in the case of the losers in strategic competition.)

Savvy competitors, that is, afford their surroundings close scrutiny; filter the information they gather through historical, cultural, and organizational lenses; decide how to manage those surroundings; and act. If sufficiently alert, resolute, and nimble, they keep up with change—and philosophers teach that keeping apace of change represents one of the foremost tasks of statecraft.

The OODA construct applies to conflict situations ranging from duels between lone swordsmen to power politics between nations. Contends Boyd, the likely victor in wartime or peacetime strategic competition is the contestant who best stays in tune with far-from-static surroundings. Or, better yet, the victor takes charge of his surroundings, modifying them to his advantage—and thus keeping his opponent perpetually disoriented and vulnerable.

In other words, the savvy antagonist disorients rivals by throwing “fast transients” at them. If you’re a flyboy like Boyd, prosecuting a dogfight against an enemy warbird, you can suddenly climb or dive, add or shed speed, or juke at odd angles. A fighter ace constantly changes the combat environment around his opponent until he loses touch with reality. The other aviator can’t observe, orient, decide, and act accurately or speedily enough to keep pace with changes his antagonist imposes. In short, a well-executed series of radical maneuvers leaves a less agile foe in the ace’s crosshairs.

You’ve got the foeman once you outwit and outmaneuver him. An uptempo, more economical, more clearsighted OODA cycle confers dominance over competitive endeavors.

And again, keeping an opponent perpetually off-balance is about more than fancy tactics in close combat. Strategic maneuver or diplomatic stratagems can accomplish much the same thing. China, Boyd might say, knows what it wants; wants it badly; and is acting on that desire. It has a sense of purpose and the steadfastness to pursue its goals relentlessly. Having observed and oriented to conditions in Southeast Asia, it has decided on a strategy and acted. Meanwhile, America is floundering back in the observation and orientation phases. Advantage: China.

To be sure, the U.S. leadership knows what it wants, namely to preserve a status quo that has served the region well for seventy years. Yet conserving a status quo betokens a static, reactive strategic vision. Washington is stuck trying to adapt to a strategic setting China has repeatedly altered through bewildering actions.

If you’re China and covet the South China Sea, fast transients include proclaiming, loudly and often, that sea and sky belong do you—never mind solemn covenants and longstanding custom that say otherwise. It includes deploying your coast guard and fishing fleet as policy implements of choice—baffling rivals like America that are accustomed to confronting navies rather than white hulls or seagoing militiamen. And it includes dredging island air and naval stations out of the seafloor while insisting it’s no big deal.

In short, Chinese officialdom has taken offbeat measures to consolidate its hold on the South China Sea while branding its actions as harmless. In so doing it plays on Washington’s well-known aversion to confronting Beijing. In Boyd’s OODA parlance, that aversion constitutes a self-imposed impediment to observing events accurately and orienting strategy to manage them. Strategic drift delays American countermeasures that might confound Beijing’s slow-motion effort to abolish the regional order.

The more U.S. policymakers console themselves that the current slate of half-measures is “complicating Chinese calculations,” and the more they heed scholars who espouse a “long pause” before confronting China, the happier Beijing is. Time is China’s friend.

Now let’s conscript a Prussian soldier—and one of Boyd’s intellectual north stars—to help the U.S. leadership orient itself to the new normal China is busily constructing. Carl von Clausewitz declares that “The first, the supreme, the most far-reaching act of judgment that the statesman and commander have to make is to establish by that test the kind of war on which they are embarking; neither mistaking it for, nor trying to turn it into, something that is alien to its nature.”

And war this is for China. Indeed, it’s “three warfares.” Beijing wages media, psychological, and legal offensives on a 24/7/365 basis to sway audiences in China, Asia, and beyond—and bend the diplomatic and strategic setting in its favor. Day-in, day-out efforts to shape opinion conform to founding Chinese Communist Party chairman Mao Zedong’s maxim that “politics is war without bloodshed while war is politics with bloodshed,” and to erstwhile Foreign Minister Zhou Enlai’s admonition that “All diplomacy is a continuation of war by other means.” Marxist ideology may be in retreat; Marxist habits persist in Beijing.

Indeed, refusing to accept that Beijing considers the strategic competition in Southeast Asia a form of bloodless combat verges on trying to transform the competition into something alien to its nature. Clausewitz and Boyd have tart words for competitors who delude themselves—and justly so.

Clausewitz goes on to sketch a “discovery” process whereby combatants understand what they’re getting into. Call it observe and orient, Prussian style. To “discover” how many resources to muster to compete successfully, he writes, “we must first examine our own political aim and that of the enemy.” What each contender wants and how badly he wants it determines how many lives, how many military implements, and how much national treasure he’s prepared to expend on behalf of his goals—and for long.

The contender who’s all-in has an edge over a tepid foe—even if the foe is stronger by material measures. China is fervently committed to its goals in the South China Sea. Is America? It should be. It’s trying to uphold principles that undergird the international system over which it presides. That no state may unilaterally abrogate parts of international law is one. That the seas are a common, open to the free use of all seafaring peoples, is another. That the South China Sea is a crucial theater, home to U.S. allies and friends who may need defending, is still another. These are stakes of a high order.

Next, Clausewitz instructs would-be competitors to “gauge the strength and situation of the opposing state.” Geography makes an immense difference in the strength each competitor can bring to bear where it counts. China holds the homefield advantage in a contest against America, a visiting team operating far, far from home. Competing close to home bestows a host of advantages, whatever the estimates of the military balance may imply. It’s important to be “very strong” in general, vouchsafes Clausewitz, but especially at the decisive place and time. It’s about concentrating forces at the right place on the map at the right time to make the difference.

The weak, then, can be stronger where and when it matters. China’s People’s Liberation Army, Coast Guard, and other implements of marine might operate close to their bases, whereas U.S. Navy forces are far from theirs and dispersed across the globe. Who’s better able to concentrate superior forces at the decisive place and time—especially when it can back up seagoing forces with shore-based fire support? And who’s more willing to hazard valuable warships and airframes—the contender who’s passionately committed to an enterprise, or a halfhearted opponent? Both material and psychological factors work in China’s favor.