How Is Russia Improving Its Kilo-Class Submarines? 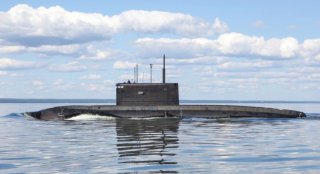 Here's What to Remember:  The Soviet Navy designed the original Kilo-class tranche, also known as Project 877 submarines, in the early 1980s for anti-submarine warfare (ASW) as well as anti-surface warfare (ASuW) in shallow coastal/littoral waters.

The Russian Navy maintains a large submarine force with more than 60 boats of all classes in commission, including nuclear-powered ballistic-missile and cruise missile submarines as well as a mix of nuclear and conventional attack submarines. However, most of the front-line boats date from the 1980s, and the fleet is largely made up of submarines that were designed in the Soviet-era.

Moscow has made it a priority to upgrade the aging sub force, and it is clear those efforts are underway.

"This year we are to lay the keels for two project 636.3 submarines," Admiralty Shipyards's CEO Alexander Buzakov told Tass last Friday. "The 5th and 6th for the Pacific Fleet."

However, Buzakov added that the no submarines of the Project 677 (Lada) would begin to be built this year, which suggests that the Admiralty Shipyards, an affiliate of the United Shipbuilding Corporation, may lack the capacity to take on multiple projects. It was last year that the Shipyards had handed over to the Russian Navy's Pacific Fleet two submarines of project 636.3 Varshavyanka or Improved Kilo-class, while an additional two are in under construction.

According to Tass, by 2024, a total of six non-nuclear submarines of Project 636.3 are to be completed for the Pacific Fleet. The facility, which is located in Saint Petersburg is one of the oldest and largest shipyards in Russia, and it can produce both nuclear and diesel-powered submarines as well as large auxiliary vessels for the Russian Navy.

It was founded by Czar Peter of the Great of Russia in 1704, and from its founding to 1917, the shipyard built more than 1,000 vessels for the Imperial Russian Navy. During the Soviet-era in the Cold War, the facility produced the Victor I-class of nuclear submarines and later the Victor II and Victor III-class submarines. Between 1974 and 1998, the shipyard saw the construction of 298 submarines, including 41 that were nuclear powered.

In addition to the new submarines destined for the Pacific Fleet, the Admiralty Shipyards have built ship Project 636.6 boats for the Black Sea Fleet – including subs that participated in strikes with Kalibr-PL cruise missiles against insurgents in Syria.

The Soviet Navy designed the original Kilo-class tranche, also known as Project 877 submarines, in the early 1980s for anti-submarine warfare (ASW) as well as anti-surface warfare (ASuW) in shallow coastal/littoral waters. To facilitate that role, the Kilo-class is considerably smaller than Russia's massive ballistic missile submarines, so-called boomers. Since its inception, the Kilo-class has also been steadily improved and is represented by three variants: Project 877, Project Project 636, and the latest Project 636.3.