How Russia's T-14 Armata Tank Stacks Up Against the Competition 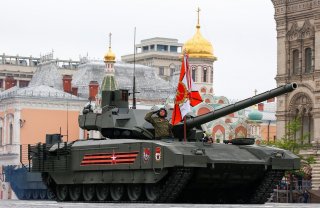 Here's What You Need to Know: Top Russian defense officials have previously argued that the prior generation of Russian MBTs still fares well enough against its western counterparts that there is no military need to rush the T-14.

The T-14 Armata boasts a bevy of best-in-class features, but can Russia produce enough of them?

By far the most anticipated product in the next-generation Armata Universal Combat platform, the T-14 Armata is a main battle tank (MBT) that clocks in at forty-eight tons and can reportedly reach speeds of ninety kilometers per hour. The tank is designed around an unmanned turret scheme, boasting a 125-millimeter 2A82-1M smoothbore gun with autoloader compatibility. The T-14 also sports the Kord 12.7mm heavy machine gun with a sophisticated “remote reloading” mechanism, in addition to the latest in Russian explosive reactive armor technology, laser-guided missile integration, partially automated targeting algorithms, and digitized onboard equipment. The tank’s other features may include future potential compatibility with laser weapons and hypersonic missile systems.

These strides in firepower, mobility, and survivability suggest that the T-14 is more than able to give any currently-serving NATO MBT a run for its money, but the Armata faces a different kind of challenge: all those bells and whistles don’t come cheap.

In absolute terms, Armata’s cost metrics look fairly healthy. The current projected per-unit cost of the T-14 Armata is just under $4 million dollars, which puts the Armata well under its older and less advanced M1 Abrams counterpart. For more of an apples-to-apples comparison, consider that South Korea’s fourth-generation K2 Black Panther has a per model cost of over $8 million and Turkey’s fourth-generation Altay MBT comes in at just under $14 million, more than double and triple the Armata’s price tag respectively. Given how expensive fourth-generation tanks are to research, develop, and mass-produce, one could argue that the T-14 offers fairly good value for its reported features and performance-- at least, in absolute terms. But the full picture is far grimmer.

Russia’s relatively modest defense budget (typically seen in the neighborhood of $60 billion, though experts have compellingly argued there is much more to this number than meets the eye) is being stretched thin across a wide gamut of ambitious modernization projects being simultaneously pursued across every service branch. Output has fallen woefully short of the military’s apparent plan to serially produce 2,300 T-14’s by 2020. It was reported earlier that twenty pre-production units had been delivered to the Russian army for testing, with eighty more to follow.

Top Russian defense officials have previously argued that the prior generation of Russian MBTs, including the T-72, T-80, and T-90, still fares well enough against its western counterparts that there is no pressing military need to rush the T-14 out of the gate. “Having a military budget ten times smaller than that of NATO, we are achieving our objectives due to such efficient solutions,” Russia’s Deputy Prime Minister Yuri Borisov said in 2018. “Why flood all Armed Forces with the Armata tanks, we have the T-72s in great demand in the market, they take it all, compared to the Abrams, Leclercs, and Leopards, for their price, efficiency, and quality,” he said.

Most recently, Defense Minister Sergei Shoigu announced that the first serial T-14 batch will arrive in 2022. It remains unclear how fast, and how widely, serial T-14’s will be circulated throughout Russia’s Armed Forces.