How the U.S. Air Force Keeps Its Old Fighters and Bombers Flying 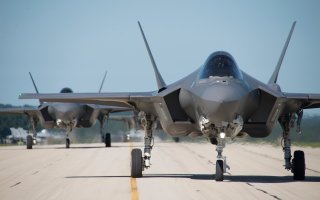 Here's What You Need to Know: The Air Force plans to fly the F-35 well into the 2070s and beyond.

The Air Force B-52 is a historic Vietnam-era aircraft, the F-15 and F-16 are from the 1980s, the B-2 is now thirty years old and the C-150 Cargo aircraft took its first flight sixty-five years ago in 1954. Even the F-22 is now more than twenty years old and F-35 development goes back more than fifteen years.

Also, while munitions, guidance technology and explosives have all matured considerably in recent years, the external bomb bodies of air-dropped weapons have been relatively unchanged since the 1960s, Air Force researchers at the Mitchell Institute for Aerospace Studies pointed out in a previous study.

Yet, all of these platforms are still flying today to great effect in many respects, despite their age.

“Most of our Air Force is eligible for an antique tag—we are executing around the world as the world’s greatest Air Force in spite of that,” General Arnold Bunch, Commander, Air Force Material Command, told Retired Lieutenant General David Deptula, Dean of the Mitchell Institute for Aerospace Studies in a special video series.

One reason key elements of the Air Force’s old fleet continue to perform is simple as it relates to the strength, durability and continued viability of the airframes. The B-52 airframes, for example, have retained their solid, high-performance form, enabling the service to upgrade the avionics, weapons, communications gear and electronics of the aircraft.

“We have an active aircraft structural integrity program. That is why we say it is OK to fly the B-52 out to 2040 or the risks associated with flying the B-1,” Bunch said.

The C-130 airframes have also held up well, and the service has been having success with a center wing box replacement program. Bunch did say it was time to divest the fleet of its oldest F-15C models as it would not be cost-effective to replace part of their frames. Furthermore, Bunch said, the service is investing in the new, upgraded F-15EX and F-35.

“We are not going to be able to keep the F-15C fleet as long as many people originally thought. The wings not replaceable and we’ll have to invest in F-15EX and keep the F-35 going,” Bunch said.

This means the service is having success bringing new life to older aircraft. A quick rundown of service life extensions explain this well; the service plans to fly its B-52, F-22, F-15, B-2 and C-130 well into the 2040s and beyond.

Some estimates even say that, with continued airframe, stealth coating, weapons and software upgrades, the F-22 could very well fly until 2060. As for the F-35, the Air Force plans to fly it well into the 2070s and beyond.

Software upgrades, sensor and radar adaptations, new weapons, next-generation avionics and electronics, AI-enabled computer systems and cutting-edge stealth materials all continue to make these existing platforms almost entirely new. The only actual resemblance of these older aircraft is, quite simply, the airframe.

However, none of this means the Air Force is not greatly concerned about the age of its fleet. Deptula once described the current force as “geriatric” in an interview with TNI.

Much of this is happening; the F-22 is now operational with upgraded variants of the AIM 120-D and AIM-9X due to software upgrades and the B-52 is getting massively improved radio communications, in-flight data links and bomb-delivery capacity with an internal weapons bay. Moreover, the B-2 is also receiving a new Defensive Management System sensor, 1,000-fold faster computer processor and upgraded B-61 Mod 12 nuclear bomb. Finally, the service is building brand new F-15EXs.

All this being said, it certainly makes sense that the Air Force is working aggressively to fast-track a new generation of emerging platforms such as the B-21 stealth bomber, KC-46 tanker and sixth-generation stealth fighter. This is not much of a list in terms of sheer numbers, therefore despite the enthusiasm and promise of defining platforms like the B-21, many Air Force weapons developers and senior leaders lament the fact that there simply are not very many new or next-generation platforms being built. This is something many believe needs to change quickly, lest the Air Force fall way behind Russia and China.