This Is How the U.S. Army Wants to Sink a Navy in the Next Big War 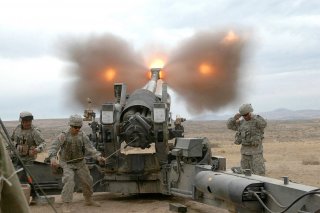 Here's What You Need To Remember: Strapping howitzers to landing craft could help the Army to contribute to amphibious operations against heavily-defended beaches where air support might not be able to reach -- or where air and artillery support both are necessary to soften enemy defenses. The U.S. Marine a few years began practicing similar tactics.

The U.S. Army for the first time since the Vietnam War has practiced firing howitzers from landing craft.

The training could help the ground combat branch’s artillery crews prepare for high-intensity warfare in the Pacific region.

There, the 73-feet-long landing craft joined up with the Virginia Army National Guard’s 1st Battalion of the 111th Field Artillery Regiment to load and mount 105-millimeter M119 howitzers.

“The conception for a riverine fire mission is nothing new, but it would be the first time since the Vietnam War it has been done,” the Army explained. “It would take Sgt. 1st Class Christopher Horn, who took responsibility of 1098th TD in 2016, to resurrect the concept.”

“I’m a 13 Bravo and was with an artillery unit, so when I started to look into the history of the unit to familiarize myself with it, I was shocked to see that the modern day utility vessel was used as an artillery platform in the Vietnam War,” Horn said.

“Once the concept was brought up to Lt. Col. Damien Boffardi, 11th Battalion, 7th Transportation Brigade (Expeditionary) commander, he recognized the relevance that this would give the watercraft units in a near-peer environment, and propelled the project forward.”

The first challenge for the artillery unit was stability on the landing craft. Sandbags, composite bulkheads and platforms were fabricated to secure the Howitzer to the vessel. Once secure, the challenge would be how the recoil would affect the set up.

According to [Virginia Army National Guard Capt. Daniel] Tarrant, the largest challenge came later on in the digital communication during the dry fire missions.

“We weren’t receiving our fire mission from the lead vessel with the fire direction center. Having it loiter in the area made it difficult to receive information. Once the boat banked itself, we had no problems. These are the types of problems that we could not foresee and what make this exercise so valuable,” he said.

On the watercraft side of the operations, the biggest challenge was how to hold the vessel still with an extreme level of precision.

“Firing accurately isn’t the only job of the gun crew, they have to shoot-and-move to avoid return fire,” Horn said. “There is a fine balance between beaching the vessel to a point that it is stable enough to fire, and not be so beached that it cannot pull itself off the bank to leave when the firing is complete. This is a job that is usually on the gun crew, but now resided on the vessel crew.”

Strapping howitzers to landing craft could help the Army to contribute to amphibious operations against heavily-defended beaches where air support might not be able to reach -- or where air and artillery support both are necessary to soften enemy defenses. The U.S. Marine a few years began practicing similar tactics.

A detachment of Marines with Camp Pendleton, California in 2017 strapped a High Mobility Artillery Rocket System to the deck of the amphibious transport dock USS Anchorage sailing off the California coast and fired rockets at targets 40 miles away.

Marines with the 31st Marine Expeditionary in 2018 parked wheeled Light Armored Vehicles to the decks of the assault ship USS Wasp and practiced firing the vehicles’ 30-millimeter cannons at targets in the South China Sea.

“The ability to project power from and at sea is critical,” Lt. Col. Tom Savage, operations officer with 1st Marine Expeditionary Brigade, told reporters aboard the nearby USS Essex. “It’s a significant capability.”

It’s a significant capability the Army and Marines now share. But they’re not alone. Chinese soldiers for years have practiced firing artillery from transport ships in preparation for a possible seaborne invasion of Taiwan.