How the U.S. Military Is Preparing for Unmanned Warfare 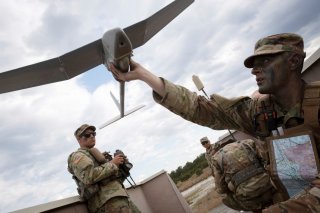 Here's What You Need to Remember: For U.S. forces spoiled by 70 years of unchallenged superiority, it will come as a rude shock that the skies are not friendly. Hence the U.S. Army is asking for ways to detect and destroy drones.

Drones were great for a while, as long as it was only the U.S. military that used them. Now the Pentagon is waking up to the possibility that potential enemies like China, Iran and North Korea might use them against America.

But it's not just drones that are the threat. It's swarms of drones, perhaps tens or dozens or hundreds, spying or striking at U.S. troops. A poor man's form of asymmetric warfare capitalizing on the simple fact that you can strap a camera or a bomb to a $300 flying robot that a 10-year-old can operate.

China and Russia have drones. Iran claims to have developed a whole family of them, including an alleged stealth drone and a "kamikaze" drone. Iran also loves swarm tactics. It plans to swarm U.S. Navy warships with floating waves of armed speedboats or overwhelm American tanks with hordes of anti-tank motorcycles.

For U.S. forces spoiled by 70 years of unchallenged superiority, it will come as a rude shock that the skies are not friendly. Hence the U.S. Army is asking for ways to detect and destroy drones.

The Army wants a weapon that can both detect and destroy a swarm of UAVs. It would "disrupt these platforms’ autonomous flight-control and navigation capabilities or… cueing a weapons system like the Remotely-Operated Weapon Station (RWS) or other medium or large-caliber weapon.," said the Army's research proposal.

The system would be mounted on vehicles or at Army installations. More interesting, the Army proposal also notes that it might be mounted on UAVs, which raises the possibility of using drones to shoot down other drones.

But how? The Army suggests a few solutions. One is jamming the detecting and jamming the drone's radio command frequencies. A more fiendish option is to use the radio signals between the drone and its ground station to identify the ground station's location, and then blasting it with air or artillery fire.

The U.S. and Israel are busy developing laser weapons that can shoot down drones. The Army is working on its truck-mounted High Energy Laser Mobile Demonstrator while the Navy is testing its shipboard Laser Weapon System (LaWS) on a ship stationed in the Persian Gulf.

But the research proposal suggests that the Army is looking at stopping drones with jamming or old-fashioned machine guns and cannon. Perhaps something that can be mounted in a turret on a Humvee. Given that laser weapons are still years away from operational deployment, and are susceptible to impediments such as weather or dust, it's probably better to go with a less exotic—and expensive—solution for now.

Is anti-drone defense even feasible? The Army seems to think so. "The objective of these capabilities is to enable the detection and capture and/or destruction of all enemy UASs [unmanned aerial systems] on the battlefield," said the research proposal. Indeed, this is certainly easier and cheaper than trying to shoot down ballistic missiles descending at supersonic speeds, a challenge that the U.S., Israel and everyone else have yet to master. Some high-altitude drones like Global Hawk spy from as high as 65,000 feet. But most battlefield drones operate much lower and slower; a tiny hand-launched Army Raven UAV flies at 500 feet at less than 60 miles per hour, while even a more sophisticated Predator might cruise at 10,000 feet.

On the other hand, despite mutterings across America about shooting down pesky drones with rifles, it's not that easy, as these gun enthusiasts in Arizona demonstrated.

More important, while Iran or North Korea might launch one or two or a dozen ballistic missiles in a volley, cheap drone technology means that an adversary could launch a lot of UAVs. It's hard to believe that Iran could defeat America by filling the skies like a plague of little quadcopters. But their chances of success are a lot better than pitting the Iranian Air Force against modern U.S. aircraft.

Michael Peck is a contributing writer at Foreign Policy and a writer for War is Boring. Follow him on Twitter:@Mipeck1. This article is being republished due to reader interest.