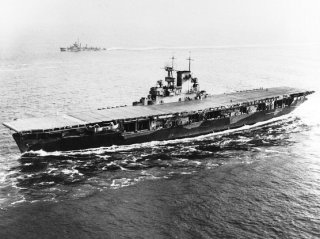 Key point: The Navy had allocated all but 14,700 tons of its carrier treaty allowance and decided to build a small carrier, USS Wasp, with the remaining tonnage. The particular compromises allowed by the Navy to keep it within its weight obligation ultimately doomed the ship during its trial by fire in 1942.

Throughout the 1920s the United States had three aircraft carriers: USS Lexington, USS Saratoga, and USS Langley, the first purpose-built U.S. Navy carrier and technically as an experimental ship not part of the treaty. The Navy had allocated all but 14,700 tons of its carrier treaty allowance and decided to build a small carrier, USS Wasp, with the remaining tonnage. The particular compromises allowed by the Navy to keep it within its weight obligation ultimately doomed the ship during its trial by fire in 1942.

This article and is being republished due to reader interest.