How Will Donald Trump's Tax Returns Affect the 2020 Elections? 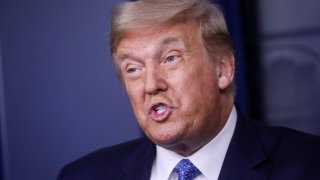 Recent Supreme Court decisions have brought the issue of Trump’s tax returns back into the news. Public opinion on the issue is clear. In a July 5-7 Economist/YouGov online poll, 54 percent said he should release his returns while 31 percent said he should not. When the organization asked the identical question in their July-August 2016 poll, the margin for release was higher at 67 percent.

In a poll taken after the Supreme Court’s decisions, Reuters/Ipsos also found a majority in favor of Trump releasing the returns. In a follow-up question, when the pollster asked why Trump had not released them, 26 percent said they believed Trump’s taxes contained incriminating evidence against him and 10 percent said Trump was trying to hide significant financial losses. Another 16 percent said they thought Trump did not want to reveal them because he doesn’t pay taxes. Fourteen percent thought Trump was pushing back against liberals. No other response was mentioned by 10 percent of those surveyed.

Despite majority support in favor of releasing the returns, the issue does not appear to have significant intensity, and it seems unlikely to figure prominently in the campaign for many voters. When asked by Economist/YouGov pollsters how much they had heard about Trump’s refusal to release them, 59 percent said they had heard either a little (40 percent) or nothing at all (19 percent). Forty percent said they had heard a lot. When asked in the poll if news organizations have given too much, too little, or the right amount of attention to the issue of Donald Trump and his tax returns, a plurality (37 percent) said too much, a third about the right amount, and 30 percent too little. A large majority of Republicans, 73 percent, said the media had paid too much attention to the issue. Forty-six percent of Democrats said the media had paid too little attention to them, 47 percent the right amount, and 7 percent too much.

Presidents are not required to make their tax returns public. Richard Nixon released his after information about one of his returns was leaked to the press, and Gerald Ford released summaries of his. Jimmy Carter started what has become a custom of releasing returns, and every president since Carter has done so. Americans disagree with Trump’s decision not to release them. For his detractors, the issue is one more thing in the catalog of criticisms about this president, but it appears that most Americans will have other things on their minds on Election Day.

Update: Last week, the Supreme Court declined a request by House Democrats to speed up the remaining judicial cases regarding the congressional subpoenas for President Trump’s tax records.

Learn more: Kanye’s bid and the black vote | State of the nation on July 4: And how it has changed over time | AEI Political Report: Coronavirus update; race and policing; election 2020; Ordinary Life: Sports talk

This article by Karlyn Bowman first appeared in AEIdeas on July 20, 2020.