How Worried Should the U.S. Be When It Comes to Russia's New Navy Killer? 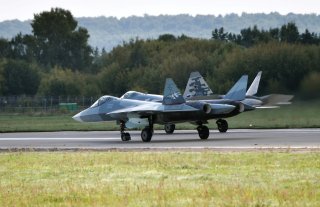 Here's What You Need to Remember: The Su-57 is Russia’s first stealth plane, and probably the most sophisticated aircraft in the Russian arsenal.

But last month, Russian President Vladimir Putin announced that seventy-six Su-57s would be delivered by 2028. Though Russian defense plans previously called for buying just sixteen aircraft, Putin said Defense Minister Sergei Shoigu had told him that the Su-57’s manufacturer had cut the price of the plane by 20 percent, which was a deal that the government couldn’t pass up. "We have agreed to purchase 76 such fighters without the increase in prices in the same period of time," Putin said.