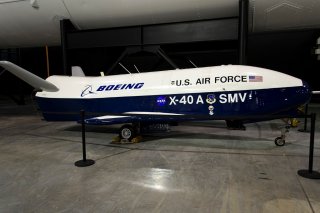 Here's What You Need To Know: "Up until the autonomous landing of the X-40A in 1998, no one had demonstrated that an unmanned space vehicle with such a low lift-to-drag ratio, and a high angle-of-attack landing attitude, could land safely,"

One key point about the X-40A that Cummings would like to set straight is a longstanding myth that the unpiloted X-40, which was, in fact, built to 85 percent scale of the X-37 to test aerodynamics and navigation systems, utilized a drag or drogue chute.