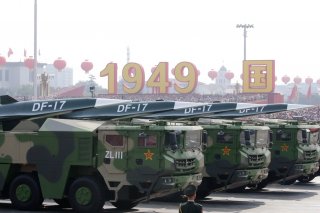 Here's what you need to remember: Between the U.S. Army, Navy, Air Force and Defense Advanced Research Projects Agency (DARPA), there are no fewer than six major conventional hypersonic weapons programs in research and development.

Winning the race to deploy hypersonic weapons will be one of the most important achievements in U.S. national security of the 21st Century. This is why the former Undersecretary of Defense for Research and Engineering, Dr. Michael Griffin, called hypersonics his number one priority in 2018. With the appropriate enablers, particularly sophisticated ISR and targeting, these weapons could radically alter the character and pace of modern warfare.

For the U.S. and its allies, hypersonic weapons are more than a counterbalance to Russia and China. They hold out the prospect for fundamentally undermining competitors’ massive investments in so-called anti-access/area denial (A2/AD) capabilities. The Department of Defense has put together a well-thought-out and -funded program to provide all Services with hypersonic weapons. Equally important, the aerospace and defense industries of the U.S. and several allies are demonstrating the technical expertise and innovative approaches that are likely to make hypersonic weapons a near-term reality.

Because hypersonic weapons are still so new, it is worth explaining what they are and how they differ from traditional ballistic and cruise missiles. Hypersonic weapons fly at least five times the speed of sound but retain the capability to maneuver in the atmosphere. There are two basic varieties of hypersonic weapons.

First, a hypersonic boost-glide vehicle (HGV) is launched aboard a ballistic missile into the upper atmosphere, at which point it is deployed. The HGV then uses the ballistic missile's speed to skip along the upper layers of the atmosphere with much greater maneuverability than traditional warheads.

Second, a hypersonic cruise missile maintains continuous thrust using either rocket power and/or air-breathing engines to reach the desired speed. They are generally smaller than HGVs and have shorter ranges. What fundamentally distinguishes hypersonic weapons from current types of ballistic and cruise missiles is their combination of speed and maneuverability.

Meanwhile, the Army and Navy are also collaborating on a common hypersonic glide vehicle to be carried by both Services’ ballistic missile. The Navy’s effort is focused on a program called Conventional Prompt Strike (CPS), which will be deployed first on the most advanced versions of the Virginia-class attack submarine in the early 2020s. The Trump administration proposes arming both Arleigh Burke- and Zumwalt-classes of destroyers with the CSP.

For the Army, hypersonics are but one element of its long-range precision fires program. The Army is focused on the Long-Range Hypersonic Weapon (LRHW), a mobile, canister-launched version of the CPS that will hold high-value targets at risk at ranges of 1,500 miles or more. It would like to have an initial operating capability for the LRHW in 2023 and is also considering a second hypersonic weapon, a mid-range missile for targets at ranges between 400 and 1500 miles.

The Air Force is concentrating on an air-breathing hypersonic weapon. The AGM-183 Air-Launched Rapid Response Weapon (ARRW), with a range of nearly 600 miles, is small and lightweight enough to allow them to be carried in numbers by strategic bombers and tactical fighters.

Hypersonic weapons could fundamentally redress many of the geographic, operational, and technological gaps that exist between the U.S. and its great power competitors. Hypersonics will enable the U.S. military to rapidly respond to the initiation of hostilities, strike high-value targets from much longer distances and offset the ability of Russia and China to conduct massed missile and aircraft strikes. As General John Hyten, Vice Chairman of the Joint Chiefs of Staff and former Commander of U.S. Strategic Command observed, hypersonic weapons could enable “responsive, long-range, strike options against distant, defended, and/or time-critical threats [such as road-mobile missiles] when other forces are unavailable, denied access, or not preferred.”

While hypersonic weapons will be a problem for the U.S. and its allies, they could be even more challenging to our great-power competitors. They hold forth the promise of devaluing the enormous investment by both Russia and China in A2/AD capabilities: both their integrated air and missile defenses and long-range precision strike capabilities. Hypersonic weapons could blow holes in Russian and Chinese defenses, allowing aircraft and slower missile systems to penetrate, and permitting land forces and Navy ships to advance close to enemy territory.

The United States and its allies will also need to deploy defenses against hypersonic weapons. According to Ellen Lord, Undersecretary of Defense for Acquisition and Sustainment, a defense against hypersonic threats “requires significant innovations across the entire kill chain, spanning indications and warning, sensing, command and control, and advanced intercept capabilities."

The most critical element of any defense against hypersonic threats will be adequate sensing. To that end, DoD is looking into the prospects for a highly-proliferated, space-based sensor layer that will provide launch to impact tracking of hypersonic missiles.

This article was first published by Real Clear Defense in November 2020 and is being republished due to reader interest.