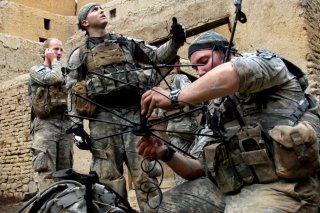 Here's What You Need to Remember: Using TRAX, operators were able to identify and track a target using an airborne sensor system, direct an armed UAS to the area, launch a net-enabled glide bomb at the target and, when a new, more lucrative target was identified, redirect the smart weapon to it in real time. Each of the participating systems employed a different existing communications system. This is the future of network-enabled warfare.

According to the Bible, all humanity once spoke the same language. But when the people sought to build a tower that would reach to the Heavens, God responded by causing them to suddenly speak different languages so they could not communicate and work together to complete the Tower of Babel. The word derived from this story, babble, means a confusion of sounds. Over the decades, the U.S. military has created a “Tower of Babel” problem in the form of incompatible communications devices, waveforms, data protocols and encryption schemes. In an era when military forces must be integrated to allow information in all forms to pass rapidly between systems, platforms and devices, the inability to communicate could result in lives lost and defeats suffered. Fortunately, a solution has been developed and is in widespread use with U.S. Special Operations Command.

Over the decades, the U.S. military has acquired a bewildering array of communications networks, systems and message/data formats. Not only did each of the Services pursue communications in their own ways and acquire their own capabilities, but often different branches and even programs within the individual Services did the same. As a result, different parts of the U.S. military often have a difficult, even impossible time communicating with one another. Adding to the problem, defense agencies and the intelligence community have their own ways of communicating information that make it difficult for them to pass vital information to warfighters.

The two most advanced U.S. fighter aircraft, the fifth-generation F-22 and F-35, have difficulties communicating not only with older, fourth-generation aircraft but with each other. Both were fielded with unique, advanced, extremely secure communications systems that don’t allow them to communicate with other types of aircraft. The F-22 can receive information data over Link 16, a common network among U.S. and NATO aircraft, but not transmit. The F-35 is limited to voice communication with the F-22. The Air Force is working on a fix to Link 16 that would allow the F-22 to send data to other types of aircraft but at the risk of being more detectable by enemy air defenses.

In the Army, soldiers may need one radio to talk with their squad mates, another to communicate with higher headquarters, yet another for vehicles to talk with one another and still more to communicate with helicopters and aircraft overhead. Tactical air controllers accompanying Army units in the field carry one radio to talk to overhead assets and another for video feeds. Even when a common network is available, incompatible message formats or data protocols can limit the amount and kinds of data that different units and platforms are able to share. The common workaround is to carry as many different radios as possible.

Civil agencies have similar problems. In the aftermath of September 11, the nation was shocked to find out that police, fire and emergency services units in the field could not talk to one another because each had acquired a different radio. The problem is still widespread.

The U.S military has long recognized the problem and tried various approaches to fix it. Some, like the Joint Tactical Radio System, proved too technically challenging and costly; most of the effort was canceled after a fifteen-year development effort. Another, the Warfighter Information Network-Tactical, proved effective, but the mobile version of the system, called Increment II, was ultimately canceled by the Army.

The current “Tower of Babel” is no longer tolerable. The new world of high-end conflict requires that all U.S. forces and allies be able to talk and share data with one another. The ability to do so is at the heart of emerging concepts for future conflict, in which every sensor must be linked to all shooters and battles with a more accurate common operating picture. One of the major constraints on implementing these new approaches is the inability to link together all military forces and capabilities with a seamless communications architecture across every domain.

Now, a solution to this central problem for future warfare seems to be available. Like so many recent innovations in military capabilities, this one was first developed for U.S. Special Operations Command. The Tactical Radio Application eXtension (TRAX) provides users with an integrated Air/Ground tool that supports the use of coded waveforms for two-way data transmissions between airborne platforms, unmanned aerial vehicles, ground units and tactical headquarters using multiple waveforms, message formats and data protocols. TRAX and its Android variant, ATRAX, allow forces on the ground to direct overhead assets to targets, identify friendly and hostile forces, and send and receive real-time video feeds. TRAX permits operators to direct net-enabled weapons to their targets using data from a wide range of space, airborne and ground/sea-based sensors.

Currently TRAX is employed by Special Operations forces to connect platforms, ground units, and operations centers using a wide range of communications and data systems. This is extremely important because it means that there is no need to replace existing communications systems; TRAX/ATRAX works with all of them. It can support all commonly used message formats and data protocols. Also, TRAX is interoperable with all current Programs of Record.

Equally important, TRAX supports a common information database and data engine which allows information from a wide variety of sensors to be collected, stored and exploited. This capability is critical to creating a common operating picture for all forces on the battlefield and for enabling AI-based sensor-shooter integration.

An example of how TRAX can support innovative tactics in future conflicts was provided by a recent test at the Naval Air Weapons Station China Lake. Using TRAX, operators were able to identify and track a target using an airborne sensor system, direct an armed UAS to the area, launch a net-enabled glide bomb at the target and, when a new, more lucrative target was identified, redirect the smart weapon to it in real time. Each of the participating systems employed a different existing communications system. This is the future of network-enabled warfare.

The U.S. military could solve much of its “Tower of Babel” problem by deploying TRAX. Because this is a software solution, the costs would be relatively low. The impact on military operations would be instantaneous and dramatic.

This article first appeared at Real Clear Defense and is being reprinted for reader interest.