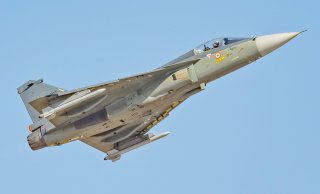 Here's What You Need to Remember: India isn’t hedging its best purely on domestic designs—it is also looking to strike a deal to open a domestic production line for either the American F-16 Block 70 or the Swedish JAS 39 Gripen-E fighter, both of which are excellent, mature designs. New Delhi has several options as to how to increase its fighter force from the current strength of thirty-three squadrons to the desired forty-five, but which it will commit to remains to be seen.

In 2016 the Indian Navy rejected the domestically built Tejas jet fighter—or Light Combat Aircraft—after a troubled thirty-three years of development in which the maritime fighting branch had invested significantly. However, the Indian Navy argued that the Tejas weighed too much, and produced insufficient thrust for takeoff from the ski-jump ramp of its forthcoming aircraft carrier.

But the Indian Navy hasn’t given up entirely on the Tejas; it is considering a Mark 2 variant under development, which will be powered by the same F414 turbofan engines as the U.S. Navy’s Super Hornet fighter.

The Tejas was developed out of the Light Combat Aircraft program, which sought a replacement for the hundreds of MiG-21 fighters nearing the end of their service lives in the Indian Air Force. The single-engine Tejas has a tailless delta-wing configuration and supposedly costs only $25 million per airplane. However, it took decades for the LCA to come together, and it continued to rely heavily on foreign components, including an Israeli Doppler radar and General Electric F404 turbofan engines.

With a top speed of Mach 1.6 to 1.8, a maximum external load of 7,700 pounds and a service ceiling of fifty-two thousand feet, the Tejas remains unexceptional compared to top-performing fourth-generation light fighters such as the F-16. The Indian Air Force has only ordered 123 Tejas jets so far to equip six squadrons by 2024. HAL, however, is having difficulty ramping up production from eight aircraft a year to the desired sixteen.

On the short term, HAL seeks to improve the Tejas Mark1 by installing an Israeli EL/M-2052 Active Electronically Scanned Array (AESA) radar, jamming pods and an aerial refueling probe. This Tejas Mark 1A subvariant will make up the latter two-thirds of the Mark 1 production run.

But the Indian firm is also taking a second crack at an Indian Navy contract with its Tejas Mark 2, which will have greater thrust by swapping out the F404 turbofans (rated at eleven thousand pounds of thrust dry) with a General Electric F414. The F414 has larger fan blades and can produce thirteen thousand pounds of dry thrust. The Indian Aerial Development Agency has already devoted $542 million to the project, which dates all the way back to 2009.

After some mixed messages from the defense ministry, the Mark 2 took a major step closer to being realized in February 2017, when General Electric provided the first two F414-INS6 engines for Mark 2 test aircraft, with six more to follow. If the Mark 2 enters production, a total of ninety-nine engines may be delivered as part of a $600 million deal. The improved propulsion might not only make the Tejas Mark 2 more viable for carrier takeoff, but increase its maximum weapons-load capacity by 25 percent, to eleven thousand pounds.

The tender also stipulated transferring up to 60 percent of the F414 engine technology to India—with GE claiming it is ready to transfer more than 50 percent. This is also significant, as India’s Gas Turbine Research Establishment has been working for two decades on domestic Kaveri K9 and K10 turbofans, which it hopes will one day be ready for installation on the Tejas or the HAL AMCA stealth fighter currently under development. Additional foreign technology could help spur the engines’ development—indeed, after paying $2 million for consultation with a French firm, the GTRE estimates that new Kaveri engines may be ready for testing in 2019.

The Tejas Mark 2 would also come loaded with further enhancements to the avionics, most notably an Uttam AESA radar developed domestically by the Electronic Research and Development Establishment. AESA radars offers greater resolution and sensor stealth, and are considered to be the cutting of current fighter-borne radar technology. However, the Uttam currently is only geared for air-to-air operation, with an air-to-ground mode still in development.

The Tejas Mark II would incorporate the new features of the Mark 1A, as well as a new glass cockpit with an eight-by-twelve-inch multifunction display and an onboard oxygen system that collects air from the outside, removing the need for oxygen bottles. The new engine and avionics on the Mark 2 would stretch out the airframe an additional meter for a total length of 14.2 meters.

According to Defense Minister Manohar Parrikar, the Tejas Mark 2 is set to for its first flight in 2019, with production to commence in 2022, possibly following the establishment of a separate production line. The Indian Navy has expressed interest in forty-six or fifty-six carrier-based variants of the Mark 2 to enter service, while the Air Force has ordered an additional eighty-three Mark 2s to supplement its Tejas Mark 1s, though there is speculation an order as high as three hundred could follow if the Mark 2 is found to be satisfactory.

By investing in the Tejas Mark 2, the Indian Aeronautical Development Agency hopes to recoup more from the substantial time and money devoted to the Tejas fighter program in previous decades. If the new engines and radar perform as hoped, the Mark 2 may finally provide India with a decent domestic fighter jet that improves upon the Mark 1’s shortcomings.

However, India isn’t hedging its best purely on domestic designs—it is also looking to strike a deal to open a domestic production line for either the American F-16 Block 70 or the Swedish JAS 39 Gripen-E fighter, both of which are excellent, mature designs. New Delhi has several options as to how to increase its fighter force from the current strength of thirty-three squadrons to the desired forty-five, but which it will commit to remains to be seen.