India Could End Up With Russian T-14 Armata Tanks 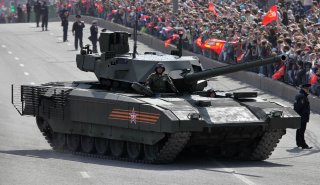 Here's What You Need to Remember: The time is good, as Russia has also been eager to find customers to help subsidize the cost of the tanks—and the Russian Army, which initially planned to acquire upwards of 2,300 of the tanks between 2015 and 2020 has scaled back its acquisition significantly, so much so that it led to a cancelation of the main production run.

Last month Russia’s Ministry of Defense announced that the production of the T-14 Armata Main Battle Tank (MBT) was underway, and that followed the news that Moscow was planning to start to work with foreign customers next year and already received several prior requests. Among the potential buyers include Egypt, Vietnam and Belarus but also India.

It isn’t surprising that New Delhi would express interest in the next-generation tank, which is based on the Armata Universal Combat Platform. During the Cold War, India used a mix of western and Soviet-bloc military equipment and the Indian Air Force (IAF) operates Russian jet fighters. In June, it was also announced that India would purchase twenty-one MiG-29 supersonic fighter jets to replace the aging MiG-21 fighters already in service with the IAF, along with around a dozen Sukho Su-30 MkI multi-role fighters.

New Delhi may see Washington as a potential partner against Beijing, but it is still in Moscow where the Indian military does its shopping. Currently, approximately 86 percent of India’s military equipment is Russian in origin according to a Stimson Center working paper.

The T-14 could be seen to give the Indian Army a powerful deterrent to China, which is also unlikely to purchase the Russian-made tank. The Chinese arms maker Norinco produces the VT-4—and Beijing has maintained that the tank is among the best in the world. It is currently China’s premier export tank, but it is also built on technology and designs behind the earlier Al-Khalid tank that was developed with cooperation from Pakistan. However, the engines for the tank had to be sourced from the Ukraine—a fact that has been a sore spot for the Chinese designers.

Whether the VT-4 is in the same league as the T-14 is of course debatable. However, China's Type 15—while lighter than the Type 99—also seems to be purpose-built for an engagement with India. It can clear rough terrain and operate in high-altitude better than other and notably larger tanks.

However, the main point is that India currently fields tanks that can be accurately described as antiquated—and this includes its force of T-72 MBTs. Clearly, New Delhi knows it has to up its game.

The time is good, as Russia has also been eager to find customers to help subsidize the cost of the tanks—and the Russian Army, which initially planned to acquire upwards of 2,300 of the tanks between 2015 and 2020 has scaled back its acquisition significantly, so much so that it led to a cancelation of the main production run. However, Russia has continued to forge ahead with the platform—even after one was reportedly destroyed by “terrorist forces” in Syria with a rather low-tech TOW-2B anti-tank system.

The T-14 tank, which is based on the Armata platform, was shown to the public for the first time at Red Square’s Victory Day parade on May 9, 2015. The new combat vehicle features fully digitized equipment, an unmanned turret and an isolated armored capsule for the crew. It was among the military hardware displayed at last month’s Army-2020 international arms show, which was held outside of Moscow.