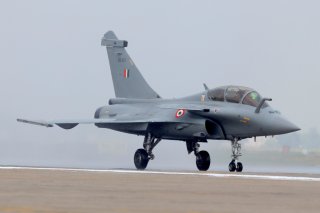 Here's What You Need to Remember: New Delhi has been eager to acquire new fighters to replace the antiquated MiGs, and the Rafales have been seen as the clear cut winner at this point. The Rafale can perform air supremacy, interdiction, aerial reconnaissance, ground support, in-depth strike, anti-ship strike and nuclear deterrence missions.

Indian Air Force (IAF) officials headed last week to France to check on the progress of the second batch of DassaultRafales jet fighters, which could soon be deployed to guard the country’s northeastern border with China. India, which has ordered thirty-six of the twin-engine, canard delta wing, multirole fighter aircraft, received the first batch on Sept. 10 and immediately deployed those to the Ladakh region.

New Delhi has confirmed that the delivery of the second batch of planes could take place in the next few weeks, and the officials were sent to France to ensure that the IAF will be able to ramp up as both India and China continue to build up forces along the Line of Actual Control (LAC).

IAF Chief RKS Bhadauria told reporters that the additional three to four jets could arrive by the end of October or early in November, and added, “This will keep happening every three to four months,” and further indicated that New Delhi might be interested in purchasing more of the aircraft.

“In terms of whether we go in for more Rafale or multirole fighter aircraft, it will be an open competition, as it is currently planned. We have received the RFI (Request for Information) responses. So this entire subject is under discussion and debate. And when this situation and the picture becomes clear and we finalize the way forward, we will share with you,” Bhadauria said in an address to the media at the beginning of this month.

The entire batch of the original order of the thirty-six aircraft is expected to be operational by early 2023. This was the first major acquisition of fighter planes in some twenty-three years since the IAF imported Russian-built Sukhoi jets.

All in With the Rafale

The IAF had been considering other multirole fighter aircraft and the other candidates for the Indian tender included the Saab Gripen from Sweden, the European Eurofighter Typhoon, the MiG-35 from Russia and the Boeing F/A-18 Super Hornet from the United States.

The IAF, which has maintained just thirty fighter squadrons, has relied on aircraft that are often older than the pilots flying the planes – and many aren’t what could be considered favored by those pilots. The IAF operates some 244 1960s-vintage MiG-21s and 84 MiG-27s that are only slightly younger. The MiG-21s are known to be quite “accident-prone,” and since the first of 874 MiG-21s entered Indian service in 1963, around 490 have crashed, killing around 200 pilots.

New Delhi has been eager to acquire new fighters to replace the antiquated MiGs, and the Rafales have been seen as the clear cut winner at this point. The Rafale can perform air supremacy, interdiction, aerial reconnaissance, ground support, in-depth strike, anti-ship strike and nuclear deterrence missions.

A group of IAF pilots is now undergoing training on the Rafale jets at the Saint-Dizier airbase in eastern France.