India Has Joined the Supersonic Missile Game in a Big Way 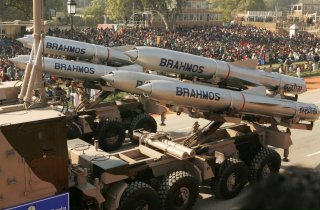 Here's What You Need to Remember: The BrahMos is actually slightly faster at Mach 2.8 than the P-800. It also weighs twice as much as a Tomahawk, at six thousand pounds.

that India is pressing ahead with the development of even deadlier BrahMos variants. To begin with, some reports implyIndia tested in 2012 a version with a new satellite guidance system and a range of five hundred kilometers. Some argue that even the regular BrahMos may be capable of going further than its claimed 290-kilometer range.