Inflation vs. Defense Spending: How Congress Should Tackle Both 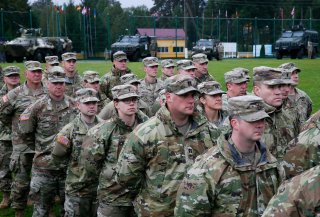 Here's What You Need to Know: To forestall this disaster in 2023, the administration should increase the topline for defense from the proposed $756 billion to at least $806 billion. This $50 billion (6.6 percent) increase would cover inflation for this year, assuming it does not accelerate.

The nation’s inflation rate hit a 30-year high of 6.2 percent this past week, in effect creating a virtual defunding of the US military through the corrosive effects of inflation. Congress and the Biden administration now have two problems they must immediately solve: the 2022 defense budget currently in the hands of Congress, and the 2023 president’s budget request which is being worked on by Department of Defense officials.

I warned in July 2021, that an inflation “anaconda” would squeeze and weaken our national security. Sadly, this has now come to pass. And it’s only going to get worse. To gauge how bad, let’s look at the budgets for fiscal year 2022, then for 2023.

Today, in the 2022 budget, our serving military members are taking a real pay cut. The recently released October 2021 inflation numbers show costs rising at a rate of 6.2 percent. The 2022 pay raise, which has yet to be funded by Congress, is currently set at 2.7 percent. With inflation at 6.2 percent, this means a nearly 3.5 percent real pay cut. It is important to note that military pay raises trail the overall economy by a year due to the archaic budgeting processes used. This is not a problem during periods of stable or decreasing inflation which we have had for the past 25 years, but during periods of escalating inflation, which is where we are today, the effect is devastating for our junior troops. It should also be noted that those receiving retirement benefits or Social Security will receive a 5.9 percent increase. Our troops deserve the same.

America’s political leadership must act quickly to protect the readiness of the force and the well-being of their families. First, Congress needs to pass the defense budget for 2022 by its self-imposed December 3, 2021 deadline, including the additional $25 billion above the president’s request. Second, Congress needs to increase funds to bring military pay raises up to 5.9 percent. This has to be done while the budget is being marked up in conference. Lastly, the administration and Congress cannot allow the defense budget to be held hostage to other appropriations. It must be passed, either as part of a larger bill or standalone. The well-being of the families of the soldiers who defend our country should never be used as a bargaining chip.

The budget for 2023 is even bleaker. In the 2022 budget released by the Office of Management and Budget (OMB), the administration forecasted defense spending to be $754 billion in 2022 and $756 billion in 2023. With 2022 already underfunded, a flat topline with no growth for any pay raises or inflation in FY23 is a disaster for America and a dream for our adversaries. Let’s look at the overall budget and the effect of the military pay raise required by law: The military pay raise for 2023 would be 4.7 percent, which should be higher as it is likely to be a real pay cut for our troops if inflation persists. Assuming that the civilian workforce will get the same pay raise, the cost of just the 4.7 percent pay raise will be about $8 billion, money not provided for in the 2023 administration budget estimate. When one adds that to fuel costs which are up 30 percent and general inflation which is up 4 percent, readiness and modernization will need to be drastically reduced.

To forestall this disaster in 2023, the administration should increase the topline for defense from the proposed $756 billion to at least $806 billion. This $50 billion (6.6 percent) increase would cover inflation for this year, assuming it does not accelerate.

The next several weeks are critical for our military. Not only does Congress need to pass the defense budget for 2022, but the administration needs to finalize the budget proposal for 2023. These two efforts must be synchronized. Passing the defense budget in December with the additional $25 billion, should be coupled with a revised 2023 OMB topline of $806 billion. China is testing hypersonic missiles, enemy drones are being used to conduct assassinations in the Middle East, Russia is massing troops in Eastern Europe, and cyberattacks continue. The world remains a dangerous place; let’s agree to do two things: not cut the real wages of our troops and not allow inflation to invisibly defund the military.

Maj. Gen. John Ferrari, US Army (ret.), is a nonresident senior fellow at the American Enterprise Institute and a former director of program analysis and evaluation for the US Army.

This article was first published by the American Enterprise Institute and is being republished here due to reader interest.