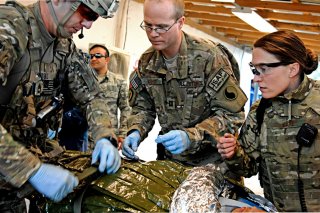 Almost two years ago, a Special Forces doctor saved the life of a retired Ranger. Now he has been recognized with the highest non-combat award for bravery.

On April 7, 2019,  Lieutenant Colonel Larry Wyatt, a clinic director at the US Special Operations Command, and retired Colonel Thomas Wells, a former Ranger and trauma surgeon, were cycling on a bike trail near Tampa, Florida.

As they neared a bridge, the pair saw two motorcycles approaching them in speed. Because of the trail’s tight space, Wyatt and Wells had little room to maneuver. The motorcyclists didn’t slow down and struck them at an estimated 50 miles per hour. Both were knocked out, and Wyatt was dragged 30 feet before coming to a stop.

“I came to maybe 15 to 20 seconds after impact, and all I could hear was my dad’s voice in my head,” Wyatt recalled in a press release. “He’s an old mountain man from the back woods of Oregon, and he raised my brothers and I rough, but fair and loving. I could just hear him saying ‘You will face rough times in your life. You always get up on your own two feet by yourself. So, get up.’”

From the violent collision, the Special Forces doctor had suffered a broken nose, fractured teeth, split eyebrow, and a badly maimed forearm, which hemorrhaged. Despite his injuries, Wyatt began attending to himself, Wells, and the two motorcyclists.

“I could hear Doc moaning. I was still trying to clear my head because I’m still foggy. I see Doc laying on the motorcycle. I had one of the riders help me move Doc away from the motorcycle and then began to treat him. I performed what is called crepitus grimace exam on Doc feeling for grinding of the broken bones. Orthopedics is not the gentle part of medicine and he was in a lot of pain,” added Wyatt.

Eventually, paramedics arrived and took them to hospital. Both men have spent close to two years recovering from the events of than unfortunate day.

Wyatt’s actions on that day earned him the Soldier’s Medal, the highest award for non-combat related bravery. General Richard D. Clarke, the commander of SOCOM, presented the award to Wyatt in a ceremony on December 22 at MacDill Air Force Base, Florida.

Wyatt’s Soldier Medal’s citation states that “Wyatt’s personal example of selfless service, superb medical knowledge and unhesitating decisive action are consistent with the greatest traditions of our uniformed services and played a pivotal role in saving the lives of two individuals.”

Lt. Col. Wyatt began his career as an enlisted soldier. He finished the Special Forces Qualification Course (SFQC) as a Special Forces Medical Sergeant (18D) and was assigned to the 7th Special Forces Group, completing several deployments to Central and South America. The 18D course arguably produces the best first responders in the world.

After his time in 7th SFG, Wyatt moved to the 5th Special Forces Group.

Thereafter, Wyatt got his commission and became a Special Operations Physician’s Assistant. He is also a Combat Diver and served as the PA of 3rd Battalion, 5th SFG, and as the Group’s Dive Medical Officer.

In addition to his deployments in the US Southern Command’s area of operations, Wyatt has spent more than four years deployed to Iraq on combat deployments.

On that day, Wyatt’s actions earned him the Soldier’s Medal, the highest award for non-combat related bravery. General Richard D. Clarke, the commander of SOCOM, presented the award to Wyatt in a ceremony on December 22 at MacDill Air Force Base, Florida.