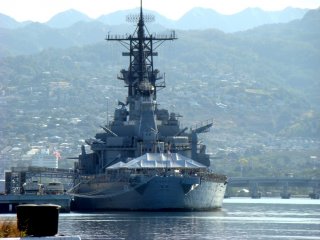 Here's What You Need to Know: It’s worth thinking about what the battlefleets of the world might have looked like in 1950 if the demands of the Second World War had not pulled resources away from battleship construction, while at the same time demonstrating that technology had passed the great warships by.

The late 1930s promised a renewed era of battleship construction, similar in some ways to the bonanza that immediately followed the construction of the HMS Dreadnought. The “naval holiday” restrictions imposed by the Washington Naval Treaty system were relaxing, and in any case Japan and Italy had determined to abandon the system, reducing the constraints on Britain, France and the United States. Moreover, Germany and the Soviet Union were preparing to re-enter the battleship construction game.

The two ships of the North Carolina class entered service in 1941. Four South Dakotas followed in 1942 and 1943. Both of these classes were built according the Treaty requirements, with a speed of about 28 knots, a displacement of 35,000 tons, and an armament of nine 16” guns. Six Iowas, also armed with nine 16” guns, would enter service by 1945, and five massive Montana class battleships (70,000 tons, with twelve 16” guns) would round out the fleet. All of these ships would have been completed by the mid-to-late 1940s. In addition, in 1940 the U.S. Navy ordered six Alaska class “large cruisers,” armed with nine 12” guns and with a speed of 31 knots, which were battlecruisers in all but name and which likely would have served with the battle fleet.

The twenty-three ship battle squadron, comprising a slow wing of the North Carolinas, South Dakotas and Montanas, and a fast wing of the Iowas and the Alaskas, would have been divided between the Pacific and Atlantic Oceans. The Montanas were too large to use the Panama Canal, preventing easy transit of the most powerful ships. Even divided, however, the two squadrons would have proven competitive with any battle fleet in the world.

The British battlefleet of 1950 would have included a motley assortment of warships from different eras. The most modern ships included the five battleships of the Duke of York class and the six battleships of the Lion class, all of which probably would have entered service by 1950. The weird HMS Vanguard was a product of wartime exigency, and might have been canceled if construction had proceeded at a more leisurely pace, but she was ordered before the war began, and consequently we can include her in the calculations.

The battlefleet of the Royal Navy in 1950 thus would have consisted of five King George Vs, six Lions, HMS Vanguard, HMS Hood, HMS Renown and three modernized ships of the Queen Elizabeth class. The Royal Navy might also have retained Nelson and Rodney (presumably after refit) to fill out the slow wing of the squadron, giving the fleet fourteen fast battleships and five slow battleships. The disposition of these vessels across the world would have depended on the demands of maintaining the Empire.

As it happened, the demands of constructing these ships vastly exceeded the capabilities of Soviet shipyards. Four battleships and two battlecruisers were under construction by June 1941, but one of the battleships had fatal construction flaws and had to be cancelled. Problems in design and machinery likely would have created additional delays. However, practice makes perfect, and if all had gone well, we can imagine a Soviet Navy with perhaps eight battleships and four battlecruisers by 1950. These ships, due to the defects of Soviet maritime geography, would have been divided between four different fleets incapable of mutual support, leaving squadrons distinctly inferior to those of local competitors everywhere except the Black Sea.

Japan dove into the late 1930s naval race with the Yamato class battleships, a group projected at five ships that would have outclassed any battleship existing at the time. The Yamatos displaced 72,000 tons at full load, carried an armament of nine 18.1” guns, and could make 27 knots. Although only three ships were completed in real life (one to a highly modified design) there is no reason to doubt that Japan would have completed all five ships if war had not intervened. Japan planned to follow up the Yamatos with the A-150 class, a slightly larger and slightly faster group of battleships that would have carried six 20.1” guns in three triple turrets. Although only two of this class were ordered (with expected completion date around 1947), we can imagine that Japan would have had time to complete a third vessel.

This would have given Japan eight modern, very large battleships by 1950. But as with the Royal Navy, the Imperial Japanese Navy had no interest in discarding its older ships, especially as many of them had been recently modernized. It is likely, thus, that the 1950 Imperial Japanese Navy battleline would have included the two Nagato and four Kongo class battleships, although the speedy Kongos might have been shifted to carrier escort and other specific “cruiser” duties. Unlike the British, Americans and the Soviets, the Japanese would have had the luxury of keeping their battle squadron concentrated for use in a single theater of operations.

Committed construction of all these ships would have given Germany ten modern battleships by around 1947. Germany had enough construction slips to build perhaps two more battleships by 1950, although it is unclear how the design might have evolved beyond the H-39 class. Hitler authorized the preparation of truly monstrous designs of 90,000 tons and larger, although it seems unlikely that Germany could have completed such vessels by 1950. More likely, the Kriegsmarine would have opted for something similar to the H-41 design, an upgraded H-39 with 16.5” guns and an improved protection scheme. Altogether, this would have left Germany with a squadron capable of competing with, but not overwhelming, the Royal Navy of 1950. It likely would have been more than sufficient to keep the Soviet Baltic Fleet bottled up, however.