Instead of Retired, Russia’s Beloved Tu-22M3 Bomber Is Being Upgraded 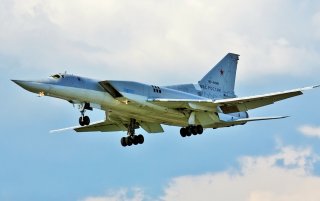 Here's What You Need to Remember: Tu-22M3 remains the staple strategic strike bomber of Russia’s Aerospace Forces, with just over sixty Tu-22M models currently in service. Tu-22M3’s were used on several occasions over the course of Russia’s military intervention into the Syrian Civil War, flying dozens of strike missions against rebel and militant targets.

One of the most recognizable symbols of Russian airpower, the Tu-22M3 has distinguished itself over its three decades of service as an effective and eminently reliable strategic bomber.

The Tupolev Tu-22M was conceived in the 1960s as an effort to replace the unique, but deeply flawed, Tu-22 maritime strike bomber. The project was an undisputed success, with the Tu-22M offering vastly improved handling characteristics and superior pilot ergonomics. The Tu-22M brought more than enough design and component changes to be labeled as a new aircraft, but Tupolev branded the bomber as a revision to the vastly inferior Tu-22 in order to improve their chances of securing government funding. The Tu-22M platform received its first major upgrade in the early 1970s in the form of the Tu-22M2, bringing engine enhancements, additional weapons options, and navigation system improvements.

The next major revision to the Tu-22M formula was the Tu-22M3 “Backfire-C,” introduced in the 1980s. The Backfire-C boasted the superior NK-25 engines, as well as a slew of subtle, but impactful, design changes that included alterations to the nose, wings, and air intakes. The raw performance results speak for themselves: with a top speed of 2,300 kilometers per hour, range of up to 7000 kilometers, and payload of over 24,000 kilograms, the Tu-22M3 markedly outperforms its predecessor in every conceivable way. Other additions include a new radar and navigation system, which is particularly helpful for low-flying missions.

The Tu-22M3 not only has a bigger payload but boasts additional armament options. In addition to the long-range anti-ship Raduga Kh-22 missiles of prior models, the Backfire-C is compatible with the newer, inertially-guided Kh-32 anti-ship missiles that offer almost twice the operational range at 1,000 km and are designed for enhanced performance against land-based infrastructure. It was revealed in 2018 that the Tu-22M3 will join the MiG-31K as one of two currently-serving Russian aircraft to carry the new Kh-47M2 Kinzhal nuclear-capable air-launched ballistic missile, purportedly boasting a range of 3,000 km and reaching top speeds of up to Mach 12. Kinzhal was one of six advanced weapons unveiled by Russian President Vladimir Putin during his 2018 state-of-the-nation address. The Backfire-C can also carry up to ten Raduga Kh-15 missiles and a wide range of unguided bombs from the Soviet FAB series.

Tu-22M3 remains the staple strategic strike bomber of Russia’s Aerospace Forces, with just over sixty Tu-22M models currently in service. Tu-22M3’s were used on several occasions over the course of Russia’s military intervention into the Syrian Civil War, flying dozens of strike missions against rebel and militant targets.

Though the Russian military is generally satisfied with the Backfire-C’s core design, it is increasingly difficult for the Soviet-era bomber to operate effectively given the demands of modern battlefield inter-linkage and the rising prevalence of electronic warfare. To this end, Russia’s defense industry is working on a Tu-22M3M revision that will reportedly replace as much as 80 percent of the plane’s existing avionics. The changes include a new level of Global Navigation Satellite System (GLONASS) navigation integration, digitized onboard controls, modern glass cockpit, and electronic warfare countermeasures (ECM) capabilities.