Invincible? These Army Tanks and Drones Can Self-Repair 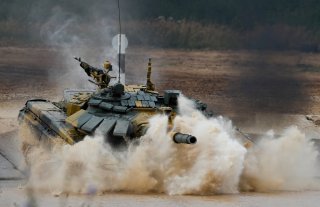 Here's What You Need to Remember: The plan, ultimately, is to potentially merge these polymers with other substances to form new composite materials able to exhibit these kinds of natural or biologically inspired self-healing properties. While these composites have not yet been engineered, Army scientists are making progress with initial efforts to engineer these kinds of biologically-inspired polymer materials based on the amino acids which construct protein polymer-like substances.

Imagine an armored vehicle takes enemy fire and is disabled, crew members are injured and its functionality is impaired when all of a sudden its armor regenerates. Perhaps a drone is conducting surveillance while operating in a forward, high-risk combat area when it is nearly decimated by enemy explosions, yet its biologically-inspired polymer material instantly self-heals. Furthermore, what if a soldier’s body armor is damaged by enemy attacks during close-quarter urban combat, placing his or her life in immediate danger, but their armored plates quickly regenerate and so keeps the soldier alive?

While not here yet, these kinds of Hollywood-sounding warfare scenarios are not entirely beyond the realm of the possible, given cutting edge research now funded by the Army Research Office and conducted by Penn State University and Max Planck Institute for Intelligent Systems.

Scientists are discovering new ways of replicating, mirroring or approximating protein-based polymer materials inspired by biology. The materials are beginning to show some of the actual properties known to characterize biologically-based polymers, such as self-healing.

“Biologically-based materials, created through research, could be used in future robotics, prosthetics or maybe a serve as a component of a composite material used in protective applications. If something was dropped or damaged, you would not need to take the time to replace it, you could self-heal the damage and get the device back in the field,” Dr. Stephanie McElhinny, program manager, Army Research Office, an element of the U.S. Army Combat Capabilities Development Command’s Army Research Laboratory, told The National Interest in an interview.

The plan, ultimately, is to potentially merge these polymers with other substances to form new composite materials able to exhibit these kinds of natural or biologically inspired self-healing properties. While these composites have not yet been engineered, Army scientists are making progress with initial efforts to engineer these kinds of biologically-inspired polymer materials based on the amino acids which construct protein polymer-like substances.

McElhinny detailed an elaborate, yet promising scientific process, which includes designing a biologically-based DNA recipe or sequence to create proteins to obtain the desired properties. While the materials are synthetically made, they are inspired by self-healing properties, McElhinny explained to TNI.

“Sequences are designed on a computer and then inserted into a bacterial strain to produce polymers. These drive into a power and that can be processed into different materials,” McElhinny said.

Such progress introduces a new scientific frontier with potentially promising combat applications. It is an example of one of many ongoing Army Research Office projects intended to serve what could be called a two-fold process. The service wants to both harvest some scientific progress for near-term combat, while also advancing what’s called basic research intended to manifest years down the road.

To draw from what could be called an over-hyped sci-fi possibility, some might at least wonder if something like this could someday make something like Hollywood’s Terminator a reality.

Kris Osborn is the Defense Editor for the National Interest. Osborn previously served at the Pentagon as a Highly Qualified Expert with the Office of the Assistant Secretary of the Army—Acquisition, Logistics & Technology. Osborn has also worked as an anchor and on-air military specialist at national TV networks. He has appeared as a guest military expert on Fox News, MSNBC, The Military Channel, and The History Channel. He also has a Master's Degree in Comparative Literature from Columbia University. This article first appeared last year.