The Iowa-Class Battleships Had Big Guns, But This Russian Howitzer's Were Bigger 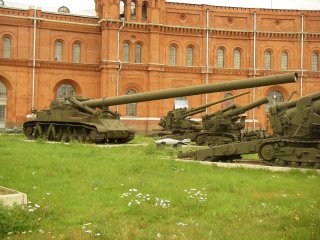 Here's What You Need to Remember: When it debuted on Red Square for Russia’s annual Victory Day parade, there was some speculation that the Oka was just a propaganda tool and not actually a viable platform for delivering nuclear ordinance. This assumption had some truth to it.

During the early years of the Cold War, American and Soviet strategic thinking firmly believed that the opening hours of the next major European war would involve incredibly devastating salvos of nuclear weapons. This assumption dominated strategic thinking in the 1950s, and planners developed a wild array of prototype tanks, turboprops, and jets that would be able to survive these crucial first hours by either avoiding nuclear explosions altogether or by being impervious to nuclear weapons thanks to excellent armor protection.

During the early Cold War years, the primary means of delivering nuclear payload was via the air from bombers, or from land—by artillery. And not just any artillery, massively large artillery. The 2B1 Oka is a prime example of huge nuclear-capable artillery that thankfully never made it past the prototype stage.

The Oka gets its name from the Oka River, in central Russia. It was a self-propelled howitzer, essentially an armored tank hull without a turret that had an artillery piece mated to the top. The Oka used a T-10 heavy tank hull as a chassis. The T-10 was equipped with a diesel engine with a respectable 750 horsepower output. Since the Oka used an actual tank hull for movement rather than a specially-built hull, it had better protection, at a higher weight cost. This higher weight combined with the impossibly large cannon on top severely hindered mobility.

The gun barrel is what really stood out. It was about 20 meters—or a whopping 65 feet—long. This crazy long barrel was essential to give the shell enough range to prevent the Oka from being hit by the blast from its own ammunition.

Yes, the barrel was long but perhaps more impressive was the shell diameter. It was huge, at 420 millimeters. For comparison, American Iowa-class battleships of World War II fame had 16-inch main guns. These guns were among the largest ever used by the United States, and were actually smaller in diameter than the Oka, only 406 millimeters.

When it debuted on Red Square for Russia’s annual Victory Day parade, there was some speculation that the Oka was just a propaganda tool and not actually a viable platform for delivering nuclear ordinance. This assumption had some truth to it.

Unfortunately for the Oka, its main attribute—a huge gun—was one of the main factors that doomed the project. During test firing, the chassis was badly damaged by the gun’s recoil. The gearbox too was catastrophically damaged.

In addition, the nuclear doctrine had changed. Instead of massive nuclear exchanges, American and Soviet war planners realized that nuclear weapons were better suited to a weapon of last resort role since using them could uncontrollably escalate a hypothetical war. A good realization for all involved.