The Iran Deal Is Dead. It's Time For Pompeo To Bury It At the UN. 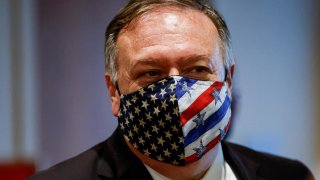 The United Nations Security Council soon will be plunged into a momentous debate as the Trump administration seeks to kill the 2015 Iran nuclear deal once and for all by invoking “snapback” sanctions.

Despite the U.S. withdrawal in 2018 from the the Iran nuclear deal, officially known as the Joint Comprehensive Plan of Action, and multiple violations of the agreement by Iran, the agreement remains on life support.

That’s because other parties to the nuclear deal benefit from continuing the sham, and hope that the deal can be cemented in place if former Vice President Joe Biden is elected president in November.

Despite its violations, Iran values the nuclear deal because it schedules elimination of U.N. sanctions and would legitimize its illicit nuclear program.

China and Russia hope to sell arms to Iran after the U.N. arms embargo is lifted under the deal. Both value Iran as a destabilizing, anti-Western actor in the Middle East that consumes U.S. attention and resources.

The Europeans also remain wedded to the deal, partly in anticipation of future commercial opportunities in Iran. They also fear that confronting Iran on its violations would lead Iran to resume its nuclear program, which willfully ignores evidence that Iran has never abandoned those ambitions.

These disparate interests have led the other parties to ignore Iran’s violations and oppose U.S. efforts to hold Iran accountable. This myopic view poses a threat to peace and security in the Middle East, which is why the Gulf Cooperation Council urged the U.N. Security Council to extend the arms embargo on Iran, scheduled to expire in October under the nuclear deal.

The unwillingness to punish Iran for its violations is an abdication of responsibility on the part of the Security Council and compels the U.S. to force the issue.

The zombie agreement, which is dead but not buried, was flawed from the beginning. The deal did more to legitimize Iran as a threshold nuclear power and dismantle U.S. and U.N. sanctions on Iran than it did to dismantle Iran’s illicit nuclear program.

None of the clandestine nuclear facilities built in violation of Iran’s nuclear nonproliferation commitments were permanently dismantled under the deal—only temporarily repurposed.

Even if Iran had abided by the terms of the nuclear deal, the agreement’s key restrictions on Iran’s uranium enrichment program expire after 15 years. This sunset leaves Tehran free to ramp up enrichment to an industrial scale and position itself for a sprint to a nuclear breakout at its own convenience.

But Iran never intended to abide by the agreement. Iran’s nuclear archive, a huge trove of official Iranian documents exposed in a major 2018 coup by Israel’s Mossad intelligence agency, proved that Iran never declared the full extent of its nuclear weapons program and never abandoned it. The Islamist regime merely restructured, downsized, and concealed the nuclear program.

The nuclear archive revealed that Iran’s nuclear weapons program was much more advanced than the Obama administration knew before it negotiated the 2015 nuclear deal. The nuclear archive exposed the shortcomings of the deal’s inspection requirements, the sunset of major nuclear limitations, and the failure to address Iran’s continued work on nuclear-capable ballistic and cruise missiles.

The nuclear archive also indicates that Iran likely was in breach of its nuclear nonproliferation commitments even before it openly began violating the nuclear agreement in 2019.

Since then, Tehran has publicly violated many aspects of the nuclear agreement, including:

Most immediately, the Iran nuclear agreement included a misguided concession: the expiration of the U.N. arms embargo against Iran after five years. This sunset clause, based on the mistaken presumption that the nuclear agreement would lead Iran’s Islamist dictatorship to moderate its aggressive foreign policy, clearly is not warranted by Iran’s behavior.

Since signing the 2015 nuclear agreement, Tehran has escalated its military intervention in Syria, ordered Iraqi Shiite militias to attack U.S. troops training Iraqi military forces and helping them defeat ISIS, and increased the flow of arms to Houthi rebels in Yemen and other proxies, in violation of U.N. Security Council resolutions.

Yet despite Iran’s clear violations of the nuclear deal and its continued export of prohibited arms to multiple battlefields, the U.N. arms embargo is set to expire Oct. 18. Washington tried but failed to extend the arms embargo through several resolutions at the Security Council.

With this extension blocked, the U.S. sees triggering “snapback” U.N. sanctions under Security Council Resolution 2231, which implemented the Iran nuclear agreement, as the only path for restoring the arms embargo.

The U.S. triggering of snapback sanctions is likely to ignite a firestorm at the U.N. Security Council, where many members insist that Washington lost its ability to invoke snapback sanctions when it withdrew from the nuclear agreement.

However, the United States has based its snapback efforts on the text of U.N. Security Council Resolution 2231.

Resolution 2231 is unusual in the adoption of the snapback process, under which any of the Security Council’s permanent members can reimpose U.N. sanctions suspended by the deal. This is the reverse of the usual process, which requires positive support in the Security Council for actions.

Language in that resolution clearly identifies the United States as an Iran nuclear deal “participant state” entitled to initiate the snapback of sanctions regardless of whether it continues to participate in the nuclear agreement, as noted by Richard Goldberg of the Foundation for the Defense of Democracies.

Once Washington invokes snapback sanctions by notifying the Security Council of “significant non-performance of commitments” under the nuclear agreement, the Security Council will have 30 days to pass a resolution that would extend sanctions relief. If the council fails to do so, or if the United States vetoes such a resolution, as it surely will, then all U.N. sanctions suspended under the agreement would be reinstated.

Get ready for diplomatic pyrotechnics at the Security Council. Parties interested in maintaining the zombie agreement will protest. Even opponents of the Iran nuclear deal have argued that the tactic would undermine the Security Council veto by forcing the issue.

In reality, the failure of other parties to demand Iranian compliance has made this confrontation inevitable.

This article by James Carafano, James Phillips, and Brett Schaefer first appeared in The Daily Signal on August 19, 2020.